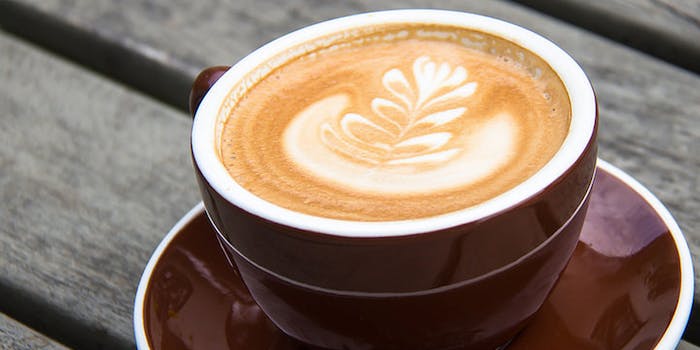 It’s times like these I’m really glad I drink tea.

If it’s not already circling the drain, Bushwick’s Coffee Shop might need to kiss its clientele goodbye: the Brooklyn café’s Instagram account has lately been given over to diatribes condemning “the Jews,” who have apparently ruined the neighborhood “via greed and dominance.” At least they’ll have something to atone for over Yom Kippur this weekend?

Here’s the appalling caption, presumably written by the café owner, in full:

Ok, what I REALLY want to talk about is how to consider the Jews (oh yes, let’s talk about it) who want a piece or all of Bushwick. My stubborn Bushwick-oroginal neighbor is a hoarder and a mess- true.. and he’s refused selling his building for lots and lots of money. His building and treatment of it makes the hood look much less attractive and I would like him to either clean up or move along. BUT NOT be bought out by Jews however, who in this case (and many cases separate- SORRY!) function via greed and dominance. A laymen’s terms version of a story would simply be- buying buildings, cutting apartments in half, calling them luxurious, and ricing them at double. Bushwick IS rising and progressing, and bettering, but us contributing or just appreciating this rise and over all positive change do not want to be lumped with greedy infiltrators. Two jewish young men with generally rude behavior (one more than the other) ordered coffee, and explained how they were looking for this neighbor of mine. I knew what was up and asked where are they visiting from. When asked where I’m from I firmly and confidently said “HERE. This is my neighborhood, it’s where I come from.” They began to lighten up and almost kiss as a bit. I openly said “looking to buy the building?” They said yes and I explained how this man has been asked to sell for large amounts of money many times- which is true. So I said “Good luck with that. But if you’re going to come here ya gotta be nice”. If you know me you’ll know what my eyes looked like. You know!- when they have the look of death within them. They one guy smiled. And they both knew where I stood. The one who had a slightly more aggressive behavior let that go fast after our initial meeting n which they experienced my confidence… and then at the end gave me his card and asked if I’d contact him when I see my neighbor. He said.. and I quote “I’ll treat you right” Whatever exactly that meant. But I did say if you come here you have to be good. We’ll see what happens from here.

A flurry of negative replies followed. “I don’t like my coffee with a side of antisemitism,” wrote djjulietwinkle. “Bigots like you are what’s killing Brooklyn.” In comments since deleted—but preserved in screengrabs obtained by Gothamist—the author defended his or her views. 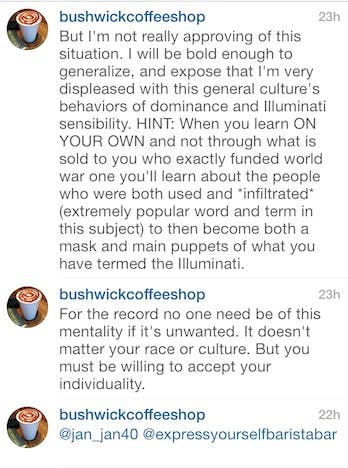 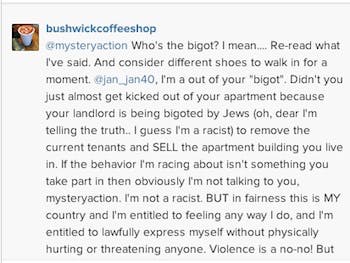 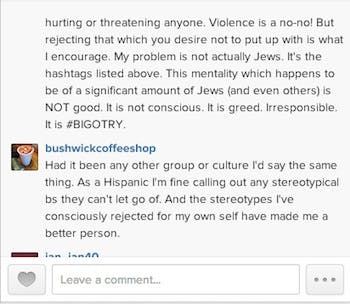 But wait, there’s more! In a pathetically misguided attempt to walk back this racism, additional posts praised some Jews—namely, Roseanne Barr and the anti-Zionist set.

This, as you might imagine, didn’t exactly quell the outrage. 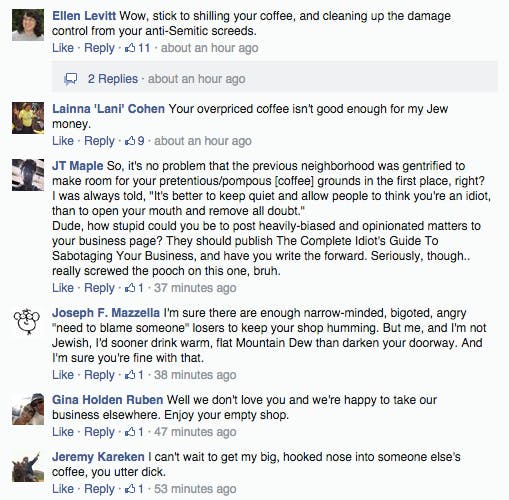 Ah, racists—is there any self-dug hole they can’t make deeper? It’s times like these I’m really glad I drink tea.