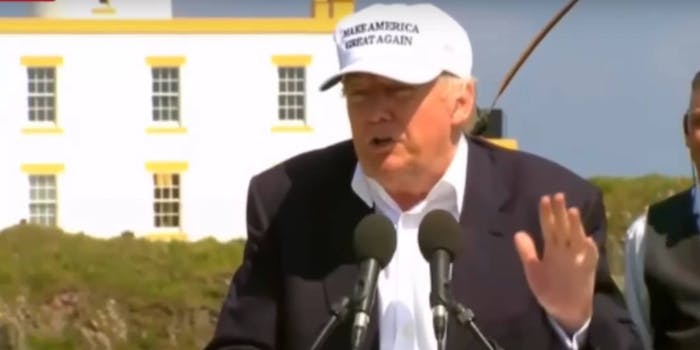 Trump's pro-Brexit tweets inspired a stream of the most British of insults.

The Brits of Twitter hurled their most viciously British insults at Donald Trump on Friday after the U.S. presidential hopeful suggested in a tweet that the Scots were elated about Britain’s European Union exit.

Yet, the business mogul-turned-presumptive GOP nominee Kool-Aid man-ed through the vitriol to return for more on Saturday morning.

Trump flew to Scotland on Friday after the historic Brexit vote to re-open one of his golf courses. As soon as he landed, he tweeted:

Just arrived in Scotland. Place is going wild over the vote. They took their country back, just like we will take America back. No games!

The suggestion that Scots, who voted overwhelmingly to remain in the EU (62%), were happy about results inspired a stream of insults both on and offline.

But the criticism wasn’t restricted to the digital realm. As Trump gave the opening remarks at the golf course ribbon-cutting ceremony, English comedian Lee Nelson lobbed golf balls donning swastikas at him.

Donald Trump surrounded with red golf balls with swastikas on them in Scotland pic.twitter.com/QPHfFoEcpd

Despite the brutal cracks and the ball tosser, the “twit” twittered again on Saturday morning, doubling down on his pro-Brexit stance:

So funny, Crooked Hillary called BREXIT so incorrectly, and now she says that she is the one to deal with the U.K. All talk, no action!

And the insults continued:

As of this writing, despite global public outcry, Trump has yet to delete his account.