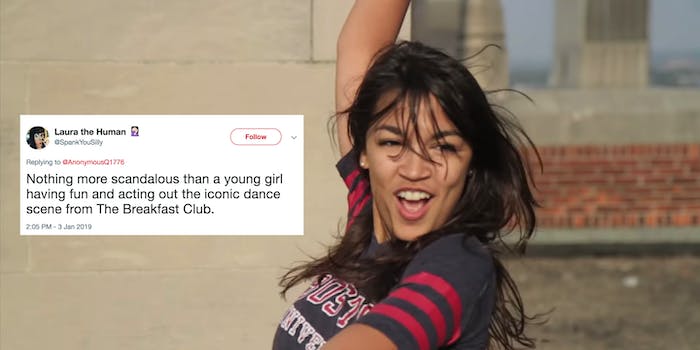 In raising the profile of the video, the trolls have won Ocasio-Cortez more fans.

Right-wing trolls are sharing a college video of Rep. Alexandria Ocasio-Cortez (D-N.Y.) dancing as part of a cheesy Breakfast Club parody in their latest and weirdest bid to smear the Democratic Socialist congresswoman they love to hate.

The video appeared on Thursday, posted by an apparent QAnon conspiracy theorist and shared by dozens of conservatives accounts.

Almost immediately, there was backlash to the tweet for branding the video as proof that Ocasio-Cortez was a “clueless nitwit.” Confused Twitter users were unsure about what exactly the problem was.

Nothing more scandalous than a young girl having fun and acting out the iconic dance scene from The Breakfast Club.

Oh my goodness. A high school student dancing and singing? Who do you think this is going to offend, the pastor in Footloose?

Oh no… young people and their friends having fun…

I keep seeing this video shared around as if its somehow bad for her.

This is a fun and endearing video that makes Cortez relatable https://t.co/6m5y6qPJIp

Many people loved it.

One user pointed out that the video had, in fact, been edited to swap out the original music, “Lisztomania” by Phoenix, for some “porny drums.”

one of the best details of that guy trying to dunk on Ocasio-Cortez doing wholesome stuff is that he reset it to like, porny drums. the original video has her dancing to lisztomania

also, it’s from when she was in college. it says “Boston College” on her shirt and everyone is dumb as shit

it is a BREAKFAST CLUB PARODY!!! https://t.co/NvuhceGG1l

This latest attack on Ocasio-Cortez builds on the momentum of a long-running narrative, which re-emerged in recent days across fringe far-right media outlets after a Gateway Pundit “exclusive” hit piece.

Reminiscent of its smear job on Supreme Court Justice Brett Kavanaugh’s accuser Christine Blasey Ford in September, the website ran photos from Ocasio-Cortez’s high school yearbook on Wednesday in a bid to paint her as a member of the wealthy “elite.”

Conservatives have become obsessed with Ocasio-Cortez’s outspoken Democratic Socialism, stories of her working class origins in the Bronx, and her having moved to wealthy New York suburb Yorktown Heights in her teens.

If it all seems a little desperate, that’s because it is. In fact, it looks like in raising the profile of the video, the trolls have won the New York congresswoman more fans.