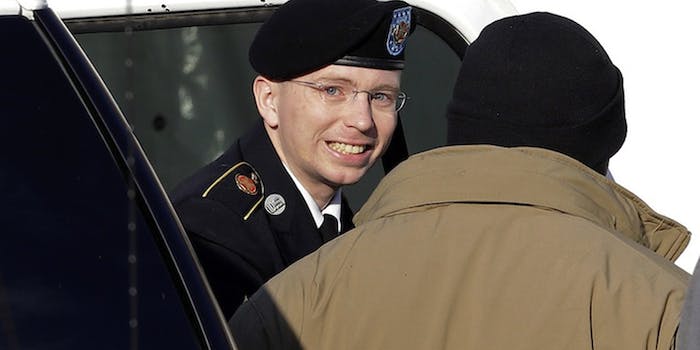 Before allegedly submitting classified documents to WikiLeaks, Bradley Manning reportedly attempted to contact two of the nation's most prestegious publications.

WikiLeaks has become a symbol for the radical, some say dangerous, new future of information distribution. But the story of its biggest leaker appears to have started in a very old-fashioned way. Bradley Manning, the 25-year-old former Army intelligence analyst accused of leaking huge caches of documents to WikiLeaks, said in a hearing today that he initially tried to leak to journalists at the New York Times and Washington Post, and only turned to Julian Assange’s shop after they didn’t take him seriously.

Manning gave a lengthy statement today in a courtroom at Ft. Meade, Maryland during which he claimed multiple attempts to leak to traditional news outlets had failed before he turned to WikiLeaks. He “talked in vague terms to a [Washignton Post]” reporter, Times’ reporter Charlie Savage tweeted from the hearing. He even tried to leak the infamous “Collateral Murder” attack helicopter video to Politico but wasn’t able to make it to the office because of the weather, apparently.

Manning also left a voicemail with the New York Times and received no response:

Manning’s attempt to contact the Times may have failed because he left a message with the public editor, who would have been Clark Hoyt based on the timeline, instead of the newsroom,according to Savage. “Not clear any NYT [reporter] heard that message or how vague,” Savage tweeted.

The allegation that the Washington Post had ignored Manning’s material isn’t new. In a 2010 chat log with the hacker Adrian Lamo, Manning complained that Post reporter David Finkel had “acquired a copy” of the Apache video but had “sat on the video.” Finkel denied the claim.

Manning’s statement came as he pleaded guilty to 10 of the 22 charges against him in his case, each of which carries a maximum 2-year prison sentence. He admitted that he leaked a number of documents to WikiLeaks, including the massive cache of State Department cables and the Collateral Murder video that first put WikiLeaks on the map.

But Manning pleaded not guilty to 12 other, more-serious charges, including “aiding the enemy,” which carries a possible life sentence. Basically, Manning is admitting that he’s WikiLeaks’ source, but positioning himself as a contentious whistleblower, not an evil espionage mastermind hell-bent on helping Al Qaeda blow up the U.S. These charges will be decided at Manning’s full court martial in June.

The revelation of his attempts to interest traditional news outlets in his story seems part of the defense’s plan to put Manning in the company of great leakers like Daniel Ellsberg. In his statement, Manning said he believed that the “world would be a better place” if the cables were out. He didn’t believe that the cables would harm the U.S. because they were a “catalogue of cliques and gossip.”

“I thought these cables were the perfect example of a need for more open state diplomacy,” hesaid.

Manning’s attempts to leak the old-fashioned way also suggests that the real value of WikiLeaks was not its state-of-the-art leaking technology but its accessibility to lowly Army Private who came out of nowhere with one of the biggest leaks in history. Manning wasn’t a connected insider or a savvy politician, and this made it hard for him to get the attention of big time journalists.

It also raises the intriguing possibility of an alternate history where the traditional news organizations Manning contacted had their shit together enough to take advantage of this once-in-a-lifetime source. The Times clearly would have acted in a way that would have limited their risk and, by association, Manning’s. There would likely have been no massive dump, and the Obama Administration’s war on whistleblowers, which was kicked off by the shock of WikiLeaks’ scoops, may have taken on a much different tenor. The Times may have groomed Manning like any other source: Maybe he’d still be in Iraq, feeding them scoops.

Of course all that would have required them to return his message.

By Adrian Chen [Image via AP]