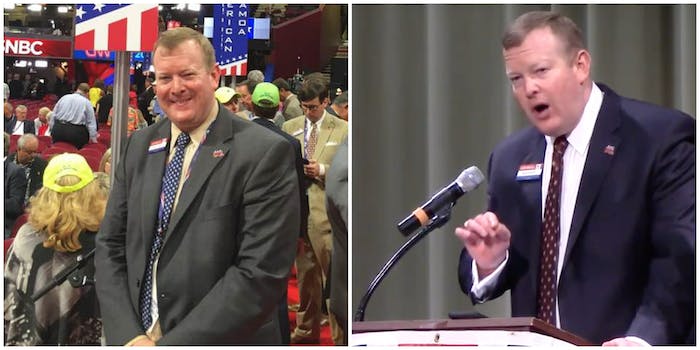 Brad Carver, the chairman of the Republican Party in Georgia’s 11th Congressional District, said the shooting at a congressional baseball practice that left five people injured was an example of “left-wing extremism,” a cause that has been propped up by some conservatives in the wake of the shooting.

“I’ll tell you what: I think the shooting is going to win this election for us,” Carver said, according to the Washington Post. “Because moderates and independents in this district are tired of left-wing extremism. I get that there’s extremists on both sides, but we are not seeing them. We’re seeing absolute resistance to everything this president does. Moderates and independents out there want to give him a chance. Democrats have never given this president a chance.”

Only hours after authorities began investigating the shooting, conservatives started to push the narrative that liberal resistance to President Donald Trump was to blame for the violence.

Carver seemed to be echoing sentiments that came about from House members, Donald Trump Jr. and other conservative voices.

An attack ad running in the election also tried to link Ossoff to the shooting.

Political rhetoric in the U.S. has long been heated and sometimes violent in nature, and Trump’s presidency has not changed that fact.

What Carver did not mention is that a minority party in Congress obstructing (and loudly disagreeing) with a president of an opposing party is nothing new—in fact, you can look back just a few years to see clear examples of this from the Republican Party.

Speaking about Obama’s agenda, then-House Speaker John Boehner said Republicans were “going to do everything—and I mean everything we can to—to kill it, stop it, slow it down, whatever we can.”

Carver also pointed to independents and moderates wanting to give Trump a “chance.” However, recent poll numbers suggest a majority of Americans don’t approve of Trump’s agenda.

A poll by the Associated Press and NORC found that 35 percent of people saw Trump in a positive light while nine in every 10 Democrats and six in every 10 independents agreed that Trump disrespected the country’s democratic institutions.

The provocative quote from Carver comes amid a very close race in Georgia. The 6th Congressional District race is seen by many politicos as an early referendum on Trump’s presidency and a possible litmus test on how voters are feeling ahead of the 2018 midterms.

Democrats are hoping to flip the district—which has been held by a Republican for decades.