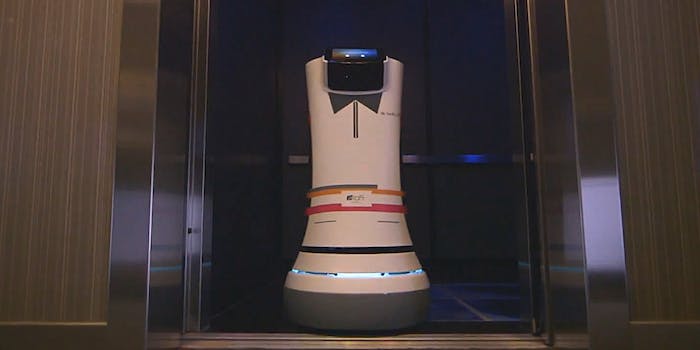 R2-D2's distant relative will deliver toothpaste to your room in three minutes or less.

It might look like a futuristic trashcan, but the strange gray pedestal sitting in the lobby of Cupertino, California’s Aloft hotel is actually a robot. It’s called Botlr, and while it can’t carry your bags to your room for you, it can deliver a book of matches straight to your door.

Botlr—an adorable play on the word “butler”—is the ultimate in convenience and customer service (and robots). Here’s how it works: When a guest requests something from the front desk, like a tube of toothpaste or another small item, hotel staff places it inside the Botlr robot. Once programmed with the room number, Botlr speeds off to deliver the goods to the guest, who then confirms they have received their delivery using Botlr’s on-board touchscreen.

The bot can spot other guests in the hallways to avoid a collision, and even knows to only lift its lid once the door of the recipient’s room has been opened. When its task has been completed, it automatically returns to its home in the lobby to recharge.

In terms of performance, the faceless mechanical bellhop has a top speed of four miles per hour, and can reach the door of any of Aloft’s guest rooms in three minutes or less. That’s about the same as a human, but Botlr has the added advantage of not needing bathroom breaks (or, you know, health insurance).

With a painted black collar and playful beeps and bloops, it’s a quirky addition to the high-end hotel, though at the moment Botlr’s future is anything but guaranteed. The robot’s first day is August 20; this marks the beginning of a testing phase that will help lay the roadmap for its future, which could include a larger rollout. Some day many years from now, when your robotic personal assistant is mixing you a margarita while shining your shoes, remember where it all started.