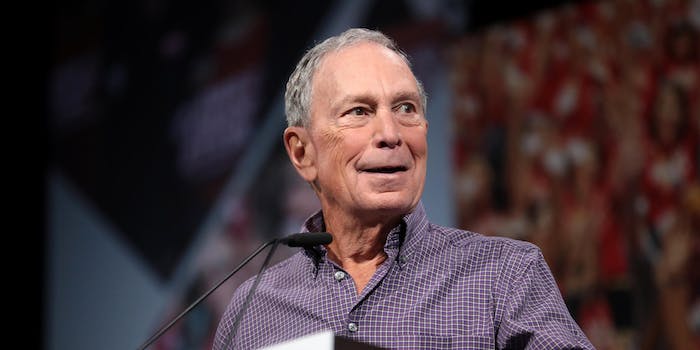 The presidential contender's oft-criticized stop-and-frisk policy again under fire after a 2015 clip is posted.

In the clip, Bloomberg calls for putting cops in predominantly minority neighborhoods because that “is where the crime is.” He goes on to say “The way you get the guns out of kids’ hands is to throw them up against the walls and stop and frisk them.” Newsweek reports the clip was unearthed from a talk Bloomberg gave in 2015 at the Aspen Institute.

Audio of @MikeBloomberg’s 2015 @AspenInstitute speech where he explains that “you can just Xerox (copy)” the description of male, minorities 16-25 and hand to cops.

Bloomberg had video of speech blocked.

Perhaps because of the problematic explanation he gives for #StopAndFrisk pic.twitter.com/Fm0YCi4ZRy

“He is a racist, he is a classist,” Dixon said in his podcast episode. “…When New Yorkers— particularly African-American, Black or brown New Yorkers— think of Michael Bloomberg, they think of stop-and-frisk.”

Swarms of Twitter users echoed Dixon’s sentiment, even posting further examples of what they believe is Bloomberg exhibiting racism.

Wake up and see #BloombergIsRacist trending.

Thank goodness people on Twitter are not as dumb as the supposly smart people on CNN & MSNBC.

By the way, Bloomberg is a sophisticated/well spoken version of Trump. They are freaking the same!

If you need the #BloombergIsRacist hashtag to know Michael Bloomberg is a racist you haven't been paying attention. https://t.co/awgTScdhnq

Bloomberg has continued to reckon with his history of support for stop-and-frisk as he continues his run for the presidency. Back in November, Bloomberg apologized for his reinforcement of stop-and-frisk as New York City mayor, “that led to the disproportionate stopping of black and Latino people across the city,” according to the New York Times.

Police stops under stop-and-frisk heightened in 2011 at 685,000 stops, according to the Brennan Center for Justice. The law and public policy institute also reported that the wane of the city’s stop-and-frisk program did not lead to increased crime.

Voices on Twitter Tuesday also targeted Bloomberg for his past as a registered Republican, saying Bloomberg continues to contort his political views to best suit his chances of winning political office. Prior to his run for the presidency as a Democrat, Bloomberg ran for mayor in 2001 as a Republican and in 2007 registered as an Independent, according to the Center for Public Integrity.

Lmao this is from 2015. Please consider that Bloomberg was literally a republican a few years ago, and his policies have harmed an entire generation of black ppl in NYC through racial profiling and unjust arrests. Don't give him a pass on this just because he's rich.

Jim Spiegelman, from the Institute’s external affairs department, told the Aspen Times in 2015 that Bloomberg “did not give a reason” as to why he opted to not have footage of the talk broadcasted.

In a released statement from his campaign, Bloomberg said his comments “do not reflect” his “commitment to criminal justice reform and racial equity.”

“I inherited the police practice of stop-and-frisk, and as part of our effort to stop gun violence it was overused,” Bloomberg said in his statement. “By the time I left office, I cut it back by 95%, but I should’ve done it faster and sooner. I regret that and I have apologized—and I have taken responsibility for taking too long to understand the impact it had on Black and Latino communities.”

Closing his statement, Bloomberg claims Trump is intimidated by his campaign and gives a heeded warning to the president.

“Make no mistake Mr. President: I am not afraid of you and I will not let you bully me or anyone else in America,” Bloomberg said. “Between now and November, I will do everything I can to defeat you whether I am on the ballot or not.”