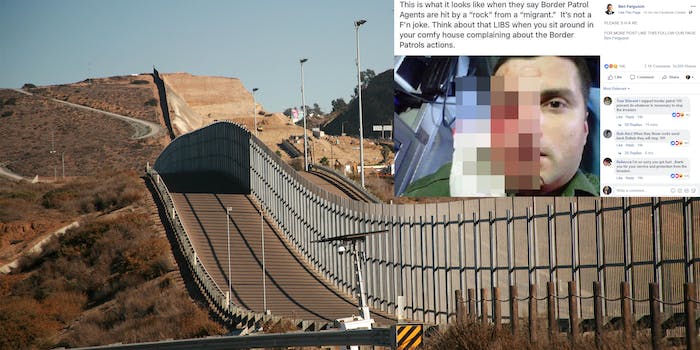 The photo is at least five years old.

On Monday, in the wake of tear gas being used at the southern border, far-right circles online tried to brand a photo of migrants fleeing in fear as a hoax.

Now, two days later, far-righters are pushing a photo of dubious origin to justify the use of tear gas. On Facebook, radio personality Ben Ferguson shared a photo showing what a U.S. border patrol agent “looks like” after a rock attack at the border.

That got picked up on other conservative Facebook pages and has made its way around the pro-Trump internet, in an attempt to show the supposed violence the migrant caravan has brought upon government agents working to secure U.S. borders.

CNN commentator Ben Ferguson's Facebook page shared a misleading meme implying it showed a recent border patrol agent hit by a rock, when in fact the picture is much older (https://t.co/TjfgtBB1hx). The meme is based on misleading posts that have been going around in FB groups. pic.twitter.com/45ySymxaUn

Even the media was attacked for not publishing the photo.

@Alyssa_Milano Border Patrol hit with bottles & rocks! Would you give a person a job who threw a bottle & rocks at YOU? pic.twitter.com/eTsNvWv4uO

The only problem is that it’s not a recent photo. The photos come from an article in Homeland Security Today in March 2013, about the risks of rock attacks on the U.S. border. The article claims the border patrol agents in the photos had been attacked by rocks prior to 2013.

In other words, rock-throwing at border officials is not what’s been happening this week.

It’s also not clear what attack this particular photo was the result of. The article just says the image was provided by Homeland Security.

A Customs and Border Patrol agent quoted in the article did not respond to an inquiry about the provenance of the photo. But the law-and-order crowd online considers it proof-positive of the need for strict border security.

However, that account from Trump was disputed by his own employees in the government. San Diego’s chief Border Patrol agent Rodney Scott said no one was “seriously injured.”