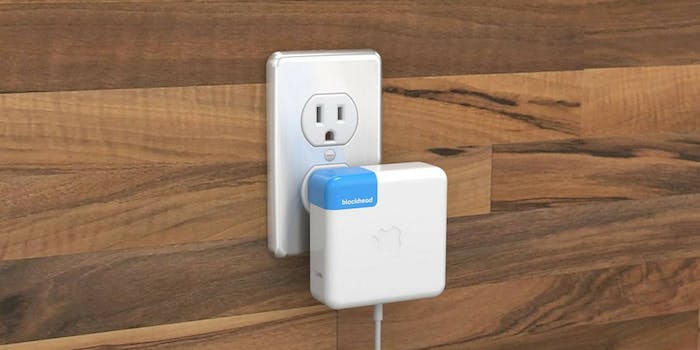 Photo via Ten One Design

Just about everything about the MacBook is perfectly designed—except the charger. That just changed.

No, Apple hasn’t addressed the issue that has inconvenienced MacBook owners, but a company has finally provided a solution in the form of a simple, angled plug.

Ten One Design announced the Blockhead, its clever solution to the nagging issue for Apple’s charger design shortcoming. The side-facing adapter allows the Apple-provided charger to run parallel to the wall instead of its bulky body sticking out from the outlet.

Blockhead slides onto the charger’s detachable prongs, which are otherwise used to attach the extended AC adapter cord. According to Ten One Design, the plug will fit every MacBook and every iPad adapter, save for the older models of the iPad Mini.

An additional, beneficial side effect to the Blockhead is less stress on the charging cord, according to Ten One Design. Because of the geometry of the plug, it directs the Apple adapter’s plug down instead of straight out from a wall. Anyone who has plugged the Apple charger in directly to the wall has experienced the charger sagging from the outlet and the eventual fraying of cables, so anything that relieves that will be a welcome addition to most MacBook owners.