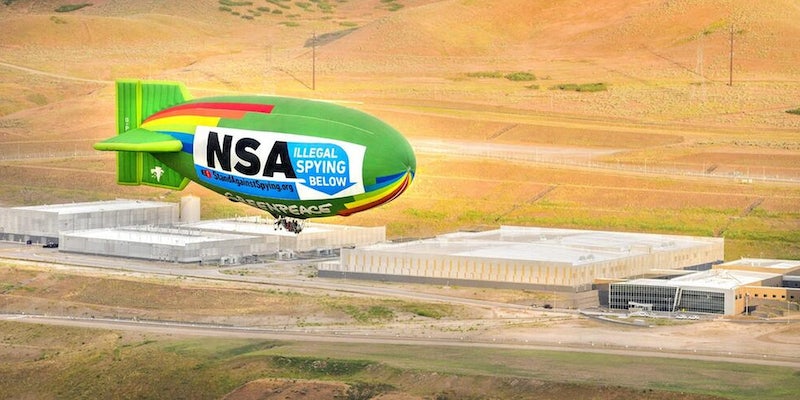 That's one way to get a message across.

Members of an alliance of privacy advocates including the Electronic Frontier Foundation (EFF), the Tenth Amendment Center, Greenpeace, and other civil liberty groups floated an airship above the monolithic midwest data storage facility that has become an unassuming symbol of America’s vast surveillance power gone awry.

The evil lima bean where NSA hoards humanity’s secrets. Just shot this from an airship above. pic.twitter.com/lUYowISAE2

The message delivered on the blimp was a simple warning to all observers below and around the world: “NSA Illegal Spying Below.”

The airship is the kick off to an EFF campaign that will grade Congress on its action (or inaction) when it comes to surveillance reform, a major sticking point for privacy advocates—and, polls show, a majority of Americans—after over a year of little change since Edward Snowden first made headlines.

As the centerpiece to the campaign, the EFF and a coalition of 20 other organizations just launched StandAgainstSpying.org with the ambitious goals of outlawing mass surveilance, reforming the secret FISA court, prohibiting the NSA from placing backdoors into encryption technology, and promoting government transparency overall.

The grades, awarded by the privacy organizations, vary widely: 241 Members (45 percent) of Congress received A grades, 188 members failed, and 77 members were awarded question marks because they’ve taken no action at all.

Best place on earth to watch a sunrise: from an airship over the Utah NSA data center, with a big banner demanding an end to mass spying.

Taking a selfie with @GreenpeaceUSA above the NSA data center in Utah was definitely necessary. More pics soon! pic.twitter.com/A1Q9ZgjAve

So a huge blimp with an anti-surveillance message just flew over the NSA’s new Utah data center (h/t @danstuckey) https://t.co/H4nmUlznAq

Another view of the blimp flying near the #NSA facility in Bluffdale Utah #utpol pic.twitter.com/51gPHbJv0F