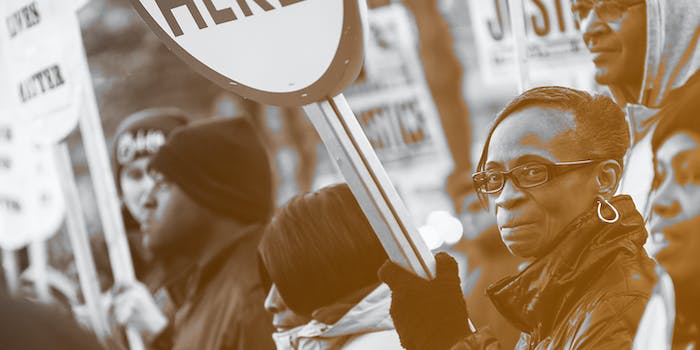 Organizers of Black Lives Matter want black girls to know the organization stands up for them and their safety.

The New York City chapter is launching a national call of action and campaign for every black girl in the U.S. The “Every Black Girl” campaign is a response to a video released Monday depicting former Richland County Sheriff’s Deputy Ben Fields body-slamming a young black girl at Spring Valley High School in Columbia, South Carolina.

Black Lives Matter: NYC strategist Nakisha Lewis is spearheading the campaign against the criminalization of black girls, which launched with the Twitter hashtag #EveryBlackGirl on Thursday and, on Instagram, #EveryBlackGirlMatters, after the video struck an emotional chord with her. On Friday, Black Lives Matter released a letter addressed to the girls who were arrested and an #EveryBlackGirlsMatter petition.

#everyblackgirl deserves to grow into a phenomenal version of themselves! Thanks @hispensoul for the reminder pic.twitter.com/oyYsu0lIJc

#EveryBlackGirl deserves to grow into whoever she dreams to be. Schools… https://t.co/2goQyk3Hua

“I was a mouthy black girl in school and that [could] have been me except I was a student in a predominantly white community,” Lewis told the Daily Dot. “I’m a black woman who was once a black girl and seeing a black girl thrown across her classroom rips my heart out of my chest. I was sitting in my office, and I was in tears. That is absolutely unacceptable.”

According to Lewis, the Every Black Girl campaign wants to send a message to the young woman body-slammed and Niya Kenny, 18, who was arrested for interfering in defense of her classmate, that they matter.

“It was extremely violent and traumatizing for us to watch,” Lewis said. “Imagine [what it was like] for her to live through and for her classmates to see… which then resulted in her arrest, and the arrest of a classmate who dared to stand for her peacefully, and without violence, and to simply say that this was wrong.”

Kenny told local station WLTX in South Carolina that she was screaming and praying for her classmate. “I just couldn’t believe this was happening, I was just crying, and he said, ‘Since you have so much to say, you are coming too.’ I just put my hands behind my back.”

“Black girls are able to have voice,” Lewis said. “… One interpretation for this young Niya who stood up for her classmate and was arrested could be, ‘I should silence myself; I should not have a voice; I should be silent and watch that teacher be silent while this young girl was being assaulted,’ just know that is not the case. You have a voice. Your voice [matters] and you should always speak.”

Before Every Black Girl, the Why We Can’t Wait campaign launched with a hashtag in 2014 as a response to the White House’s My Brother’s Keeper, an initiative to support and provide opportunities to young men of color.

According to Lewis, the campaign partnered with organizations for young black women including Girls For Gender Equity in Brooklyn, New York, and A Long Walk Home in Chicago for the equity and inclusion of black girls.

Why We Can’t Wait released an open letter to the Obama Administration that called for inclusion and equity for girls as well as transgender and gender nonconforming youth of color. The campaign wanted the administration to support space for youth of color to be represented in their full authenticity.

According to Lewis, Why We Can’t Wait and Every Black Girl both launched as calls of action. She asked her comrades to stand with her in defense of black girls. She made it clear that both campaigns aren’t the same though.

“I think the White House knows about these issues. This particular campaign that we are talking about in this moment is not necessarily a campaign targeting the White House,” said Lewis about Every Black Girl. “It’s campaign for America, first and foremost, letting these young black girls in South Carolina know that we love you, we see you, we stand for you, and black girls everywhere.”

“For many black and brown girls who are experiencing violence and other forms of trauma in other areas of their lives, they go to school, and school is the only place where they expect adults to care for them,” she said. “When the adults in that building entrusted with care and keeping of our young people are violating that moral contract to be guardians then we have a problem and we can’t stand by and let it happen.”

Lewis said it’s a problem to have so many school resource officers because young people are traumatized with experiencing police officers in schools and classrooms, going through metal detectors, and being manhandled by police. “There’s no way we can expect for them to grow into healthy adults,” she added.

Instead, she believes there should be more guidance counselors.

“Young people are experiencing trauma at alarming rates,” she said. “They don’t have the professionals that are able to deal with that and that are able to support them in their healthy development in the places where they go to be safe.”

The campaign is calling for more investment in young people, schools, and adults who are trained with the tools to handle situations and love young people. It’s targeting not just one system, but education and law-enforcement institutions as well as communities.

“If a young person is not engaged there’s a way to be with them that doesn’t mean calling an officer,” she said. “We want teachers who actually love our young people, and know how to be with them and understand what they are going through in their lives.”

The campaign won’t be just social media. Lewis said it’s up to the people if the call of action happens on the ground. Ultimately, the organizers behind the campaign are looking for both a culture and policy change that drastically shifts how students are disciplined in public schools.

“It’ll grow, be as big as the people take it,” she said. “We’re saying we get to have a conversation, and we get to create some reforms around police in our schools, and valuing of black girls and their bodies. Black girls are inherently valuable, and if we hold them as such we wouldn’t treat them in this manner. So it’s got to stop.”

Photo via Dorret/Flickr (CC BY 2.0) | Remix by Max Fleishman