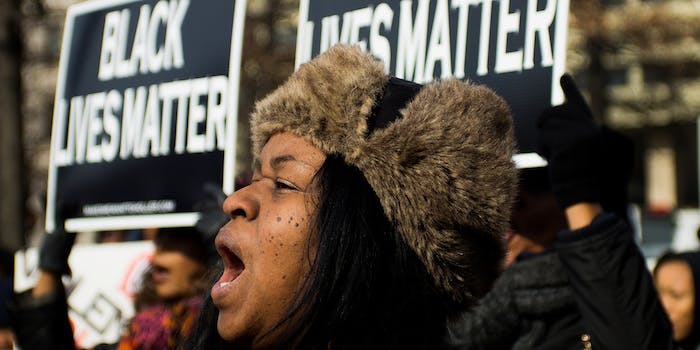 Just hours before the festivities, there was a protest on 34th Street.

New York’s Macy’s department store is the iconic site of the annual Thanksgiving Day Parade, aired on televisions across the U.S., but on Wednesday night it also played host to a Black Lives Matter protest.

Protestors gathered earlier in the evening at Washington Square Park in the West Village to show solidarity with the Minneapolis chapter of Black Lives Matter, which was rattled after five protestors were shot there Monday and gunshots rang out again on Tuesday.

“There was always a war,” said a member of the NYC Justice League while speaking to the crowd at Washington Square Park on Wednesday night, in a video posted to Twitter. “The thing is, we didn’t start it. But we’ve gotta be organized enough to protect each other.”

Around 10pm, the protestors fanned out and began marching across the city. Some walked west toward the Lincoln Tunnel, where mass arrests reportedly included members of the press and bystanders stopped for jaywalking. Other activists reported on Twitter that police began making arrests after marchers shut down streets, blocking traffic.

A group of cops arrested a man for jaywalking last night during the protest. #4thPrecinctShutDown #BlackLivesMatter pic.twitter.com/FPJ6eVr5QV

The marchers also chanted “Kids are dying, stop your buying,” as they walked through Macy’s—referring primarily to the recent police killing of 17-year-old Laquan McDonald, which led to first-degree murder charges and a potential life sentence for Chicago police officer Jason Van Dyke.

In Minneapolis, protestors continue to occupy the area outside the 4th Precinct, near the location where 24-year-old Jamar Clark was fatally shot by police on November 15. Protest updates can be found on Twitter under the hashtag #4thPrecinctShutDown.

Photo via fuseboxradio/Flickr (CC BY SA 2.0)