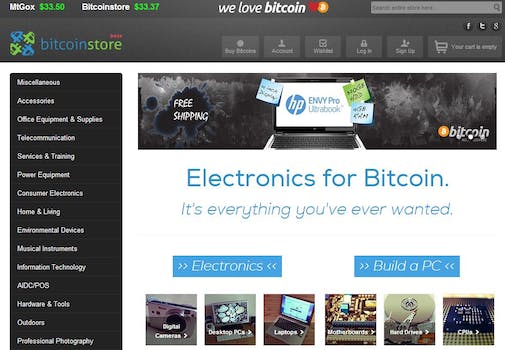 Will this online store force Amazon and NewEgg to take Bitcoin?

BitcoinStore is selling electronics at a 0 percent markup—and no profit—just to show big online retailers the power of digital currency.

BitcoinStore is yet another online merchant that only accepts payment in Bitcoin, the Internet’s booming digital currency.

The difference is in their strategy. Rather than focusing on profit, BitcoinStore aims to force Amazon, NewEgg and others to begin accepting the currency as a payment option.

The self-contained Bitcoin currency system tends to attract true believers who see it as an alternative to entrenched financial system. Together they have created a sort of shadow economy of Bitcoin stores online, but the penetration of that economy into mainstream life is practically non-existent.

BitcoinStore, an electronics store that advertises 500,000 “industry leading products” on offer, hopes to change that.

As they explain in their press release, with Bitcoin, “there is no middleman adding a markup to transactions and no middleman facilitating chargebacks. This allows websites that accept Bitcoin to chop anywhere from 1 percent  to 10 percent  off of the retail price for whatever goods they are selling.”

But BitcoinStore is going one better, charging a “0 percent markup” on its products. CEO Roger Ver is also the owner of Memory Dealers, according to BitcoinStore’s Jon Holmquist. and has leveraged his connections from that business to get a lower price from wholesalers. With no profit expectations, that means the store will undercut the big online electronics retailers significantly.

“The point of the store,” Holmquist told the Daily Dot, “is to force Amazon and NewEgg into accepting Bitcoin by giving them a bit of friendly competition. There have been attempts at creating similar stores that accept Bitcoin for electronics, but none had the level of pricing we were able to get.”

Of course, if there are no profits, a business needs another raison d’etre. If Amazon and other huge, high-profile retailers began accepting Bitcoin, that might have a very salubrious effect on the currency’s value, and anyone holding it would make money, possibly more money than the modest margins on electronics sales.

“It’s a valid worry,” admitted Holmquist. “Roger would benefit greatly if Bitcoin were to gain widespread acceptance, not merely because of any Bitcoin he holds, but because of the businesses he has invested in.”

Of course, as Holmquist points out, being an early adopter has its drawbacks as well. Ver is a plaintiff in a suit against Bitcoinica, which lost its customers’ currency in repeated security breaches.

The other explanation (though they are not mutually exclusive) is enthusiasm for the currency itself, a cypherpunk belief in the ability of the currency to create a healthier financial relationship between people. This explanation is certainly part of the overt goals of the company.

“We’re not a non-profit,” said Holmquist, “we’re just a for-profit business with a goal more important than making profit… to show customers the power of Bitcoin, which Roger is ready to pay any price for.  Also Bitcoin fits in with his political ideas incredibly.”

The company will probably add a margin back into their pricing at some point, Holmquist said, for the sake of marketing.

“But at the moment, we just need as many sales as we can, to show Amazon, NewEgg, and our suppliers that there is real demand for electronics purchased with Bitcoin.”