The true history of Bitcoin’s seedy ties to Silk Road

The following is an excerpt from Nathaniel Popper's 'Digital Gold.'

The following is an excerpt from Digital Gold: Bitcoin and the Inside Story of the Misfits and Millionaires Trying to Reinvent Money, reprinted courtesy of Harper, an imprint of HarperCollins Publishers.

A little over a month after Ross Ulbricht brought the Silk Road online, in March 2011, the site had around 150 members. It was hardly a phenomenon, but it was more than Ulbricht, who had little programming experience, was equipped to handle. When the site went down on March 15, Ulbricht anxiously chatted a friend who had been helping him.

“i’m so stressed! i gotta get this site up tonight,” Ross wrote.

“I’m not sure how this stuff works,” Richard wrote back.

“i wish i did,” Ross responded.

One of the people who visited the site while it was temporarily offline was the host of a popular libertarian radio program in New Hampshire, Free Talk Live, who was broadcasting live at the time. Ian Freeman and his cohost had been introduced to Bitcoin earlier in the year by Gavin Andresen, a regular listener who had taken over from Satoshi Nakamoto as the chief programmer for the Bitcoin software. Andresen thought that Free Talk Live’s audience would be sympathetic to Bitcoin, given its ambition to replace central banks and government-issued money—and Gavin lived practically next door in Massachusetts. He had gone up to New Hampshire to take the radio hosts out to lunch, but they went away unconvinced. Who was going to have an incentive to use this? They asked.

What’s more, getting cocaine or LSD delivered to your home—or a rented mailbox—seemed highly preferable to meeting a sketchy dealer at some dark rendezvous.

Their views, though, changed dramatically less than two months later when they learned about Silk Road.

“All of the sudden my interest has been piqued,” Freeman said on the air.

Freeman and his cohosts did their best to explain how Bitcoin and Silk Road worked, and they debated the possibility that Silk Road was a trap set up by the CIA. But the hosts agreed that Silk Road was something utterly new, harnessing Bitcoin to enable a type of transaction that was, for all intents and purposes, not possible before—an online drug purchase. What’s more, getting cocaine or LSD delivered to your home—or a rented mailbox—seemed highly preferable to meeting a sketchy dealer at some dark rendezvous.

When Freeman tried to get on Silk Road while he was on the air, and found it was down, he wondered if it had all been a mirage. But when he had been on the site shortly before, he had seen 151 registered users and 38 listings. Someone had recently delivered ecstasy tablets from Europe to the United States, taped to the inside of a birthday card. Here was something that could take advantage of Bitcoin’s unique qualities and help it grow.

“This could be the killer application for Bitcoin,” Freeman said.

When Ulbricht learned about the broadcast a day later, he had gotten Silk Road up again, and he wrote to his friend—the only person he had told about his site—with a mixture of fear and pride.

“my site had a 40 minute spot on a national radio program,” Ulbricht wrote in a chat session.

“friggin crazy, you gotta keep my secret buddy,” he added.

“I haven’t told anyone and I don’t intend to,” his friend wrote back.

“i know i can trust you,” Ulbricht responded.

One of the many listeners who heard the conversation about Silk Road on Free Talk Live was Roger Ver, an American entrepreneur living in Tokyo.

“This could be the killer application for Bitcoin.”

Roger was a committed libertarian and regular listener to Free Talk Live. He had moved to Tokyo after being arrested in what Roger believed was retaliation for comments he had made about federal agents while running for California state assembly. The experience turned Roger’s libertarian ideas from a political cause to a personal crusade. In prison, Roger taught himself Japanese, and the day his probation was up he flew to Japan to start a new life, free from the United States government.

It was during a brief trip back to California to see his family that Roger sat down to breakfast listening to a month-old Free Talk Live podcast on his iPod. When the hosts started talking about Bitcoin, something snagged in his mind and he stopped what he was doing. Many Bitcoin fanatics would later talk about their ecstatic moments of conversion to the Bitcoin cause, but few were as extreme as Roger’s. While the podcast was still playing, Roger did a search for Bitcoin on the laptop he had on his kitchen table and began making his way through everything he could find.

He was so entranced by the idea of a financial system outside the control of the government that he read clear through the night to the next day. After a short nap, he began reading again and went on reading for a few days until he eventually felt so weak, and so gripped by a sickness taking over his throat, that he called a friend and asked to be taken to the hospital. There he was connected to an IV sack that pumped antibiotics and sedatives into him. It might have been the drugs, but as he lay in his hospital bed, he felt he had found a kind of promised land that he had been waiting for all of his short life—the Galt’s Gulch he had been searching for like a libertarian Indiana Jones.

When he got back from the hospital, Ver began using the small fortune he had made from his business Memory Dealers—which sold cheap computer gear online—to dive into Bitcoin with a savage ferocity. He sent a $25,000 wire to the New York bank account of the main Bitcoin exchange at the time, Mt. Gox, and began buying bitcoins. Over the next three days, Roger’s purchases dominated the markets and helped push the price of a single coin up nearly 75 percent, from $1.89 to $3.30.

Years after this all happened, many mainstream investors, who wanted to distance Bitcoin from its darker associations, would deny that Silk Road had ever played an important role in Bitcoin’s growth.

Ver wasn’t the only person who had been drawn to Bitcoin by the Free Talk Live program and the Silk Road. By the middle of May the Silk Road had over a thousand people registered—10 times what it had two months earlier—and appeared to be a major reason for the steadily rising price of Bitcoin. When Ulbricht had to shut the site down for a few days in mid-May, the price of Bitcoin entered a short period of decline. Silk Road users showed up on the Bitcoin chat channel asking if there was anywhere else they could score some drugs. When Silk Road came back online, the price of Bitcoin picked up again.

But the real onslaught began on June 1 when the gossip/news website Gawker published an in-depth story about Silk Road. In the days immediately after this story went online, over a thousand new people were registering for Silk Road every day and the price of a Bitcoin on Mt. Gox shot up, crossing $10 for the first time the day after the Gawker story and $15 two days later.

Years after this all happened, many mainstream investors, who wanted to distance Bitcoin from its darker associations, would deny that Silk Road had ever played an important role in Bitcoin’s growth—but that’s certainly not how it looked in June of 2011 as the currency saw its first major growth spurt. Many of the programmers who would later become central players in Bitcoin—and who had little interest in buying drugs online—would say that it was during these days that they first learned about the virtual currency. 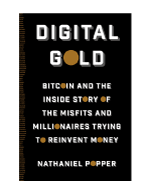 Nathaniel Popper is a business reporter at the New York Times. His first book, Digital Gold: Bitcoin and the Inside Story of the Misfits and Millionaires Trying to Reinvent Money, is being released on May 19 by HarperCollins.

Photo by Pavel P/Flickr (CC BY 2.0) | Remix by Max Fleishman