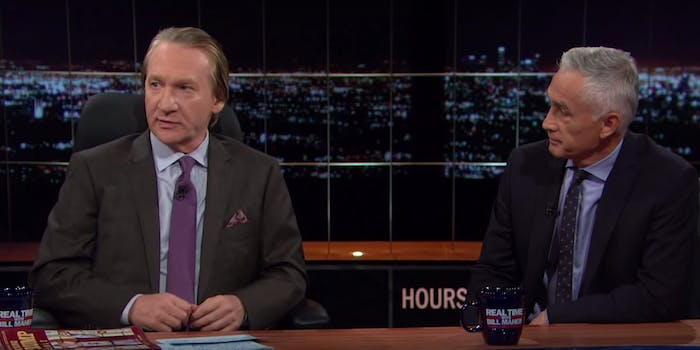 Bill Maher has a bone to pick with the many people tweeting their support on the #IStandWithAhmed hashtag this week.

Since 14-year-old Texas high school student Ahmed Mohamed was arrested for bringing a homemade clock to school, he’s been invited to the White House and inundated with internship offers from tech companies. The general consensus is that his arrest was the result of racial profiling, as teachers and police accused him of bringing a “hoax bomb” to school even after he assured them it was a clock.

Mohamed’s experience has been held up as the archetypal example of Islamophobic paranoia. However, Maher argued on his show that the police were right to arrest the teen for his harmless DIY project, saying that “it looks exactly like a f**king bomb.” He added, “Over the last 30 years, it’s been one culture that has been been blowing sh*t up over and over again.”

Maher has often been accused of Islamophobia, particularly after he made an unpleasant joke comparing former One Direction singer Zayn Malik to the Boston bomber Dzhokhar Tsarnaev. This segment seems like more of the same, with Maher essentially advocating the use of racial profiling in schools.