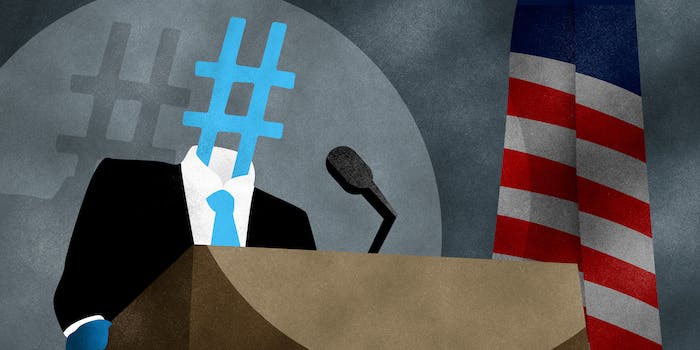 The 10 most influential hashtags of the decade

In 2010, no one knew what hashtags were. By the end of the decade, they were changing the world.

It was like a shot heard around the world. On Oct. 15, 2017, Alyssa Milano wrote: “If you’ve been sexually harassed or assaulted write ‘me too’ as a reply to this tweet.”

The hashtag #MeToo entered the national consciousness, blowing up as people used it to talk about their experiences with sexual harassment.

In one year, USA Today reports that the hashtag has been used 15 million times.

#MeToo is one of many hashtags that show how a few words can galvanize and unite people for a cause.

And in ten years of the world getting its news from Twitter, the hashtag has been fundamental in shaping conversations, highlighting concerns, and pushing for change. A simple pound sign became a force that shaped the world.

Here are the biggest from the past 10 years.

While the Tea Party movement launched in 2009, #teaparty came into full force in 2010.

Tea Partiers were upset about the rising national debt and the election of Barack Obama and railed against big government and government interference in the economy.

Conservatives were frustrated with the direction of the country (and frightened by our nation’s first Black president) and this hashtag was an important tool in their movement.

Taking their name from the Boston Tea Party, they showed up to protests and rallied around certain candidates that reflected their conservative values.

While many political commentators and politicians did not take them seriously, the Tea Party candidates rose up, primaried established Republicans and defeated Democrats in the general election.

The effects of Tea Party are still felt today. And although no one tweets about them specifically anymore, their political movement of conservative rage that fomented online is still posting every single day.

Throughout the Middle East and Northern Africa, citizens were frustrated about their repressive governments and rose up in massive demonstrations in what became known as the Arab Spring. They were fueled by and rallied around the hashtag #ArabSpring.

In Egypt, in particular, people rose up against President Ḥosnī Mubārak and his oppressive regime and a lack of political freedoms. Protesters even used the hashtags as a way to give live updates on protests; the government tried blocking the internet as a countermeasure, but the use of this hashtags showed how, in this new world, information couldn’t be contained the way governments were used to doing.

With President Mubārak’s eventual resignation, people felt optimistic and hopeful about Egypt. However in the long term, the protests appear to have not brought the desired change.

In September 2019, the New York Times reported that President Abdel Fattah el-Sisi “has cemented his hold through harsh repression that has silenced critics, curtailed free speech and ended any semblance of democratic politics.”

In 2012, the U.S. elected President Obama to his second term, and #obama2012 topped a list of the most used hashtags .

After being the first president to effectively use social media in his 2008 presidential campaign with #YesWeCan, that level of excitement was felt with this new hashtag.

It was an expression of people’s continued hope for Obama and his vision of what American could be.

The hashtag allowed President Obama’s supporters to come together to talk and promote their preferred candidate, a sort of meeting place online. And it was perhaps the last time political Twitter wasn’t a hellscape.

While 2012 was all about Obama’s re-election, 2013 was about the U.S. government shutdown in the fall.

Republicans wanted to scale back health-reform and were willing to shut down the government for over two weeks over it.

People on both sides were frustrated by the lack of progress to reopen the government. Many Americans felt that Obama and Democrats needed to compromise while other Americans wanted Republicans to end a futile shutdown that was harming people throughout the U.S.

People were angry over being furloughed while others wanted to enjoy government services, like national parks.  #MakeDCListen epitomized that frustration.

If some examples here show how powerful hashtags can be, it also reveals how ineffectual short-term Twitter trends can be.

While the government did reopen after this push, it’s been stuck in an endless cycle of shutdowns ever since, no matter how much people are hollering online.

Like 2011 with the Arab Spring, 2014 saw the rise of #UmbrellaRevolution in Hong Kong. The world watched as people marched for political freedoms in Hong Kong against the Chinese government.

When Hong Kong was handed over to China in 1997, the Chinese government had “promised that the region would be able to elect its top leader by universal suffrage by 2017,” according to the Guardian, but people were angry and frustrated that those promises were not being met.

People rose up to demand their promised rights. However, the protesters clashed with police; and the movement got the name because students used umbrellas to protect themselves from pepper spray used by the police.

The hashtag was used to organize protests at several sites, similar to the Arab Spring, but it was also a way of disseminating live information to each other as well as the rest of the world. Tracy Loh, visiting fellow at the Department of Communications and New Media in the National University of Singapore, noted in an interview to CNBC: “When images of police brutality went viral, it helped to spur emotions and images of the size of the protests helped to ‘galvanize the troops.”

After the murder of Trayvon Martin and subsequent acquittal of George Zimmerman in 2013. Alicia Garza, Patrisse Cullors, and Opal Tometi created the Black Lives Matter movement to fight about the disproportionate violence against African Americans.

It was a rallying cry to assert the humanity and right to life of Black people in America. People used the phrase and hashtag to show solidarity and work towards a more just society.

While the movement began in 2013, the hashtag gained popularity over time and made the top ten list in 2015 and was considered one of the most used hashtags ever, with over 41 million tweets as of August 2017.

The hashtag has been used to call attention to police shootings, memorialize the dead, and make a commentary on broad issues in U.S. society.

Pew Research notes: “The #BlackLivesMatter hashtag has been used frequently in support of the broader social movement or to flag general racial issues, occasionally as a form of criticism.”

However, the movement has also seen the rise of copycat, convervailing phrases like #alllivesmatter and #bluelivesmatter.

Presidential election years are a hotbed of political hashtag activity. While there were many political hashtags in 2016 (#lovetrumpshate, #ImWithHer, #FeeltheBern), #MAGA (the acronym for Make America Great Again) is the most emblematic. The phrase (and hashtag) was first seen on a hat that Trump wore and quickly became his slogan.

The phrase resonated with people, showing dissatisfaction with the current political system and excitement for this politician who was going to “drain the swamp.”

Trump supporters saw it as a way to best express their growing alienation with their own country and a vision for a “great” America. The hashtag helped reveal a darker side of the internet; Russian trolls also used it to promote conspiracy theories, racist ideas, and generally false information, as noted by Quartz.

Moreover, people used it to espouse their own racist and hateful views, and it was often used to bully and pile on people they disagreed with.

Immediately after the election, many American began protesting Trump’s actions and policies. Many were angry about and frightened for his presidency and were spurred to act when he unveiled a Muslim Ban after taking office.

#Resist is one of many political hashtags that epitomizes that opposition. Resist the patriarchy, resist racism, resist homophobia and transphobia, and much more. For many Americans, the election marked the beginning of their political activism. New groups of people entered the political arena and we are still hearing their voices today.

The hashtag is a rallying cry for people to fight against the racist and hateful actions of Trump and his administration.

#Resist has been a rallying cry for a diverse group of people fighting against Trump’s policies from his immigration stances to his attacking LGBTQ rights.

#MeToo gained momentum quickly with 15 million tweets in 2018. While Alyssa Milano was credited with popularizing the phrase, activist Tarana Burke started the movement over a decade ago.

The #MeToo movement has continued to grow as major figures in politics, entertainment, and news have been accused of sexual misdeeds against colleagues, staff members, and others. The nonprofit Time’s Up was founded to tackle the multi-faceted issues that #MeToo has brought up, including providing legal funds to help victims.

The #MeToo movement has achieved its aim in part of helping to publicize the deep roots of sexual harassment and abuse in society.

While there’s definitely still an uphill battle to be fought, there have been tangible benefits to the widespread popularity of the movement. Vox notes several outcomes of the campaign, such as: states banning non-disclosure agreements over sexual harassment and states including more protections for workers.

The Time’s Up Legal Defense has also helped 3,600 people with legal cases stemming from the movement.

If 2019 has been about anything as it’s come to a frenetic close, it’s the president’s actions in Ukraine and the movement to #ImpeachTrump.

Since House Speaker Nancy Pelosi announced the formal inquiry on Sept. 24 to the present day, impeachment has been central in the news and many people’s conversations. On Dec. 9, House Democrats announced they will be moving forward with impeachment articles for abuse of power and obstruction of Congress, which they approved three days later along partisan lines.

People are divided on the issue; some feel strongly that impeaching the president is a political must for the survival of the democracy while his most ardent supporters believe he did nothing wrong.

Whatever side of the spectrum you fall, it’s certain that this impeachment crisis will continue into the new decade. And more hashtags will follow.