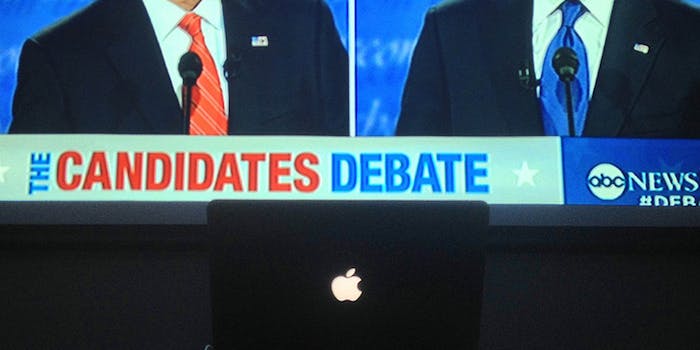 Plus Silent Jim Lehrer, a dedicated Reddit thread for Al Jazeera, and more.

Despite a rather dull first presidential debate between Democratic incumbent President Barack Obama and Republican challenger Mitt Romney, the Internet had a lot to talk about.

The much anticipated debate—held at the Magness Arena at the University of Denver in Denver, Colo., and moderated by PBS NewsHour host Jim Lehrer—got a lot of Twitter buzz early. Just how much? We’ll let The Daily Beast’s Howard Kurtz take this one:

“Twitter exec tells me there have already been more tweets about #DenverDebate than the debates in ’08—even though it hasn’t started,” he tweeted.

The snark on the microblogging platform only grew, particularly after the following Mitt Romney statement regarding what federal programs he would cut to shore up the deficit:

The Romney soundbite—one of the few in a debate that was largely devoid of them—quickly shifted the conversation to the beloved Sesame Street character.

It wasn’t long before the parody accounts came out of the woodwork.

“WTF Mitt romney… :(,” tweeted @BlGBlRD, a newly created Big Bird account that uses lower case “L”s instead of “I”s. That initial comment has been retweeted more than 50,000 times and favorited by more than 9,000. @BlGBlRD also immediately picked up a lot of followers in a short time span, clocking in at 18,447 fans as of this writing.

Equally popular was @FiredBigBird, which surprisingly was created on Tuesday, a whole day before the shot heard round Sesame Street. That account also did a solid job at assuming the personality of a recently unemployed fowl, making comments like “Look what Mitt Romney has done to me” and pairing them up with hilarious images of a down-on-his-luck Big Bird:

The Jim Henson character was fodder for other online platforms. He made an appearance on Gifwich, the official presidential debates GIF page for Tumblr:

Whereas Big Bird was getting all the cheers, moderator Jim Lehrer was jeered thoroughly. Many thought Lehrer, who said that 2008 was going to be the last time he sat behind the moderator’s desk, did a terrible job at asserting his authority and keeping the two candidates in check. He was ridiculed accordingly.

“Jim Lehrer- The replacement ref of debate moderators,” snarked @Toucherandrich, the official account of a morning sports radio show based out of Boston. The tweet was a reference to the since-replaced scab referees who officiated over the first three weeks of the current NFL season to mixed reviews.

Like Big Bird, Jim Lehrer got the parody Twitter account treatment. Roughly an hour into the debate, @SilentJimLehrer was created, doing a spot-on job at imitating the extremely yielding moderator with tweets full of passive interjections.

On Tumblr, the following image of a flustered Lehrer with Gotye lyrics superimposed, posted by user Markopolis, received a lot of love, getting more than 44,000 notes:

Most impressively, popular satirical news publication The Onion made a prophetic prediction regarding Lehrer by presciently publishing a piece entitled “Panicking Romney Attempts To Lay Off Debate Moderator” before the political bout even began.

The best Lehrer-related moment of the night went to the folks over at The Daily What, who posted a Photoshopped image of Romney “Imma let you finish”-ing Lehrer, a nod to the infamous 2009 MTV Video Music Awards interruption of Taylor Swift by rapper Kanye West:

Elsewhere on the Internet, producers for Al Jazeera English contacted the moderators of the r/politics section of social news site Reddit, asking them to host a thread about the first debate for an on-air broadcast. Redditors, as they’re wont to do, happily obliged. The post made it to the front page of the subreddit and garnered 7,700 comments, which covered the previously mentioned topics of Big Bird and Jim Lehrer as well as actual commentary on the topics argued by the two candidates.

As for the actual substantive part of the debate—the portion where the candidates talked about the issues at hand—the general consensus among the pundits is that Mitt Romney did better than President Obama.

Romney’s besting of Obama was so apparent that Ben Smith of BuzzFeed called it for the Republican 40 minutes in, claiming that he put himself on equal footing with the president:

“But Romney’s core success was that he won by not losing: He has barely weathered a campaign that reduced him to a smaller figure than President Obama. On stage, they were roughly the same size.”

Similarly, though not quite as knee-jerky, The Daily Beast’s Andrew Sullivan also gave the win to the former Massachusetts governor:

“Look: you know how much I love the guy, and you know how much of a high information viewer I am, and I can see the logic of some of Obama’s meandering, weak, professorial arguments. But this was a disaster for the president for the key people he needs to reach, and his effete, wonkish lectures may have jolted a lot of independents into giving Romney a second look.”

The Internet was a major player in leading the discussion of tonight’s debate. As @gov pointed out, the first encounter between President Obama and Gov. Romney generated 10.3 million tweets in 90 minutes. With three more debates to go, including one between Vice President Joe Biden and Rep. Paul Ryan, expect this trend to continue.