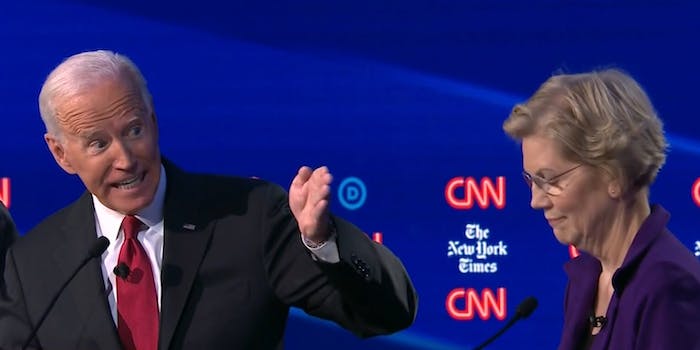 Others are calling it a 'bad look.'

During Tuesday night’s 2020 Democratic debate, it was clear many of the candidates believed it was time to push back at Sen. Elizabeth Warren (D-Mass.), who has jumped in the polls in recent weeks.

And while candidates like former Rep. Beto O’Rourke and Mayor Pete Buttigieg took shots at various points in the debate, the other presumed front runner, former Vice President Joe Biden, also jumped in–leading to one moment getting criticized and becoming the subject of jokes.

Twitter user @TheWayWithAnoa asked people to caption a moment where Biden is pointing and yelling in the direction of Warren.

The captured moment came when Warren was talking about creating the Consumer Financial Protection Bureau. Biden then jumped in yelling: “I went on the floor and got you votes. I got votes for that bill. I convinced people to vote for it. So let’s get those things straight too.”

Biden on CFPB, which Warren helped create: "I went on the floor and got you votes. I got votes for that bill. I convinced people to vote for it"

Warren: "I am deeply grateful to President Obama."

Soon enough, many people came up with jokes about it:

“ray is a mary sue!” https://t.co/DCIOPaGGqL

IT SAYS THE EARLY BIRD STARTS AT 4! https://t.co/VfuF8EGTZu

Other people also commented on the moment during the debate–with some calling it a “bad look.”

All women know what the tone of this “thank you” means https://t.co/q3qHqb6QMg

Biden basically only stage yelling at Warren telling her he got her the votes?

Joe Biden yelling at Elizabeth Warren and sticking his hand in her face was…really ugly.

I keep thinking about this exchange from tonight's #DemDebate. This is Biden yelling and aggressively gesturing at Warren for not giving him credit for *her* hard work on creating the CFPB. You can see how furious he is, both in how he treats her and in how he laughs at her. https://t.co/Dm3mTS5Wk8