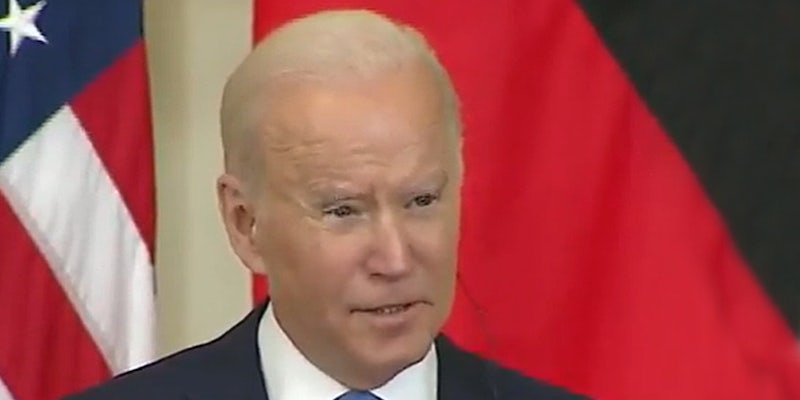 'If Russia invades... then there will be no longer a Nord Stream 2,' Biden once said.

Footage from earlier this year of President Joe Biden threatening to block Nord Stream 2 has resurfaced after the Russian natural gas pipeline began leaking this week.

Biden told reporters in February that the underwater pipeline, which spans 764 miles from Russia to Germany’s Baltic coast, would be brought to an end if Ukraine were to be invaded.

“If Russia invades… then there will be no longer a Nord Stream 2,” Biden said. “We will bring an end to it.”

On early Monday, Bjorn Lund, director of the Swedish National Seismic Network, reported that a major explosion had been detected southeast of the Danish island of Bornholm. Later that evening, a second and even more powerful explosion was detected northeast of the island.

The explosion, according to the AP, was as powerful as a 2.3 magnitude earthquake and was also detected by seismic stations in Denmark, Finland, and Norway. Lund stressed, however, that the seismic activity was not caused by an earthquake.

Danish Prime Minister Mette Frederiksen argued that the damage to the pipelines was caused by “deliberate actions.” An anonymous source speaking to the German media said the incidents could have been caused by sabotage.

“We can clearly see that this is an act of sabotage, an act that probably means a next step of escalation in the situation that we are dealing with in Ukraine,” Morawiecki said.

Polish politician and European Parliament member Radek Sikorski even went as far as to thank the U.S. while sharing a picture of one leaking pipeline, suggesting that the incident had been carried out at the behest of the Biden administration.

European intelligence officials denied knowing what caused the issue. Others fear “Moscow sabotaged its own infrastructure out of spite or to warn that pipelines are vulnerable to attack,” as further noted by the AP.

But many in the U.S., especially conservative opponents of Biden, felt that the suspected sabotage was anything but a coincidence.

“Seems pretty clear the Biden Admin made good on its promise to sabotage the pipeline,” right-leaning journalist Jordan Schachtel tweeted.

Despite the finger-pointing, no evidence has been presented thus far to indicate which, if any, nation-state is responsible.

Neither pipeline is currently operational, although both were filled with natural gas at the time of the alleged explosions. The pipelines are owned by the Russian energy giant Gazprom, which has drawn increased attention as of late as Europe attempts to ease its reliance on Russian energy.