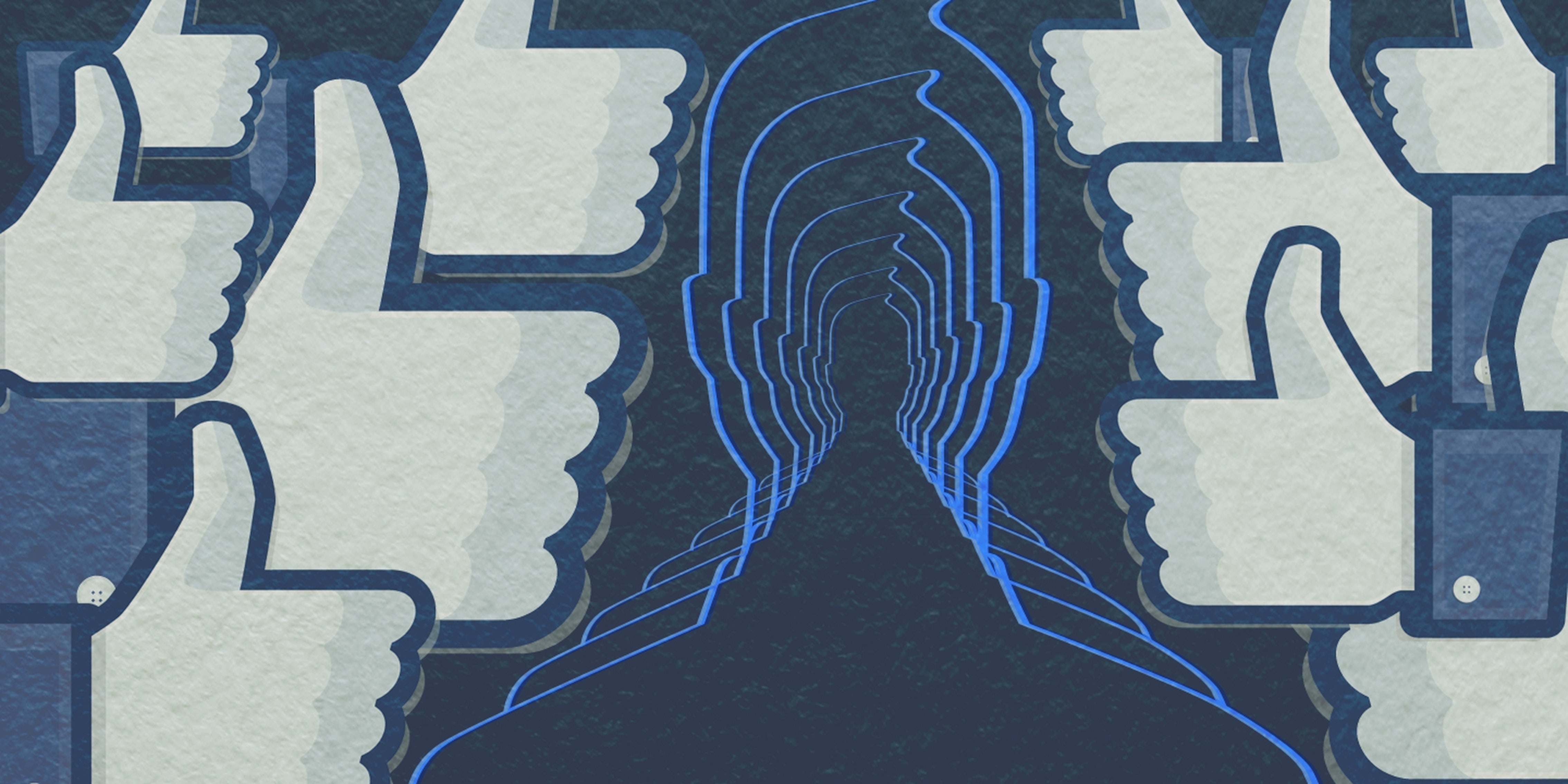 What happens when a thumbs-up just isn't enough?

Last month, I reactivated my old Facebook account for 15 minutes before realizing I’d made a terrible mistake.

I deleted my profile last year because I didn’t like the person I was when I was on Facebook—or the person that I was pretending to be. If they say that on the Internet no one knows you’re a dog, my experience of Facebook was like being a canine with a keyboard, pretending to be human. In place of feeling connected to those around me, I had “Likes” to do that for me. Being a good “friend” to 2,000 people on the Internet meant I didn’t have to be one in real life.

But like an alcoholic passing a favorite pub, I often get nostalgic for a place where everybody knows my name. I find myself craving a sip of the old social media juice, but this time around, it didn’t taste the same.

The moment I posted to the site, I felt a familiar crushing weight: the nagging unease of waiting for your update—and your existence—to be affirmed by le grand public. When the rush of addiction was gone and the dopamine had worn off, I was left with a deep emptiness, as if this place had been a ghost town all along.

I related this story recently to a friend, who relayed a familiar feeling. “When I open Facebook, I can’t help but feel all this anxiety,” he confessed. I asked him what motivated that emotion, and he explained that it was the sheer volume of information—as well as the mass of notifications, event invites, and advertisements. I wondered how common these feelings were: When the benefits of Facebook are stripped away, how many of us all left feeling burdened or overwhelmed by our own social media presence?

Research studies frequently link high amounts of Facebook use with depression, but what’s been less discussed are the feelings of “Facebook anxiety” that many users may experience when interacting with the site. In a 2012 study from Edinburgh Napier University, Dr. Kathy Charles and her team found that 12 percent of the Facebook users they felt anxious or agitated when using the social media platform. Researchers linked a high number of Facebook friends with feeling burdened or stressed out by the site.

If controversial manipulation experiments have shown that Facebook has the power to impact your mood, Marissa Maldonado, the director of outreach at Sovereign Health Group, argued that the stress associated with the site can also impact your mental health and self-esteem, as well as your overall well-being and even your ability to sleep properly. One study Maldonado cites found that “two-thirds [of respondents] had difficulty sleeping due to anxiety and other negative emotions after they had used the sites.”

If the prevailing research shows that Facebook anxiety is commonplace, I spoke to a number of Facebook users who reported similar experiences. While many people I spoke with associated positive feelings with the site, others felt anxious or overwhelmed by it.

The mass of information was the primary complaint about the site. One interviewee—who wished to remain anonymous—cited that same “visual” overload as motivating discomfort—“[checking] the news feed, the ticker, the trending topics, wall posts, messages, and everything else.” James Foley, an academic at the New School, adds that the “font of posts is neverending, and the lack of any comprehensive organization or direction to what you are seeing means it’s just a spew of information.”

Skylar Baker-Jordan, a reporter for Chicago’s Windy City Times and a freelancer for the Daily Dot, characterized Facebook as a “chore,” but writer and performer Dana Norris argued that what makes the site often overwhelming is that it can feel like a job. “You have to be funnier and better and more interesting,” she said. “Posting something and receiving no response is horrible, even though it’s likely being suppressed by Facebook metrics.”

Norris’s answer touches on oft-cited feelings of inadequacy inherent in the Facebook experience, feeling “less than” when compared to your friends’ filtered vacation photos. This has often been classified as a form of FOMO—the abbreviation for the fear that everyone is having fun but you—but the stress is more akin to the psychological effects of Photoshop. Whereas research shows that 80 percent of women experience feelings of low self-esteem after viewing fashion magazines, which present a digitized version of perfection, Facebook does the same for our daily lives. Social media curation allows you to present your life with the blemishes airbrushed out.

By playing off its users’ insecurities, Facebook commonly promotes feelings of “competition, envy, and loneliness,” as Norris argued. However, Peter Murphy, the market development coordinator at Midwest Renewable Energy Association, explained that it’s not just false positivity that is the issue but the “preponderance of negativity.” According to Murphy, this is often related to current events and national tragedies in the current news cycle: “My newsfeed reminds me of all the terrible things in the world.”

Curating your feed—by choosing to unfollow Facebook pages or friends that generate negativity—can help alleviate that stress. So can regulating problem behaviors, like spending too much time on the site or “stalking” friends who have enviable social media presences.

However, Foley argues that our desire to lurk and unhealthily peer into the lives of those around us is built into the experience itself. He compares the site to an 18th century “panopticon”—a type of prison that allowed inmates to be viewed by guards at all times. “We know what all the prisoners are showing us from their jail cells,” Foley said.

Not everyone views social media as a restrictive prison, but these statements reflect a growing trend of recognizing the particular emotional toll that sites like Facebook or Twitter can take on users. It might be a full-fledged social media anxiety disorder, an unhealthy addiction, or an unwanted annoyance, but social media is also a choice. Many, like myself, might decide to disconnect themselves entirely, while others may choose to unplug or deactivate the app from their phone. Switching to a “Page” instead of a Profile also helps cut down on the noise.

The anxiety of using Facebook might make you feel lonely, but if you feel stressed out when you open the site, you’re not alone.