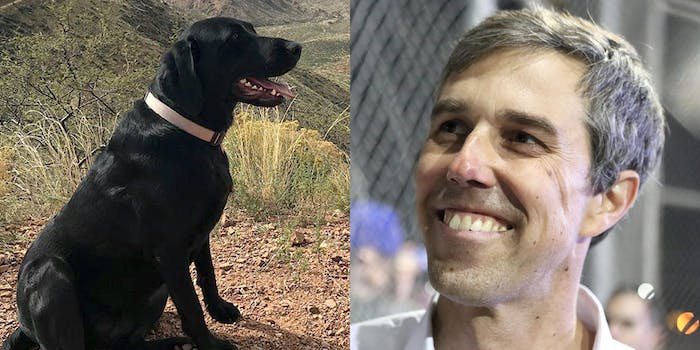 Artemis has seen some things.

Vanity Fair published a  lengthy feature on Wednesday about former Rep. Beto O’Rourke, as part of the rollout of his 2020 presidential run, which began officially Thursday with an announcement video.

In the Vanity Fair article, O’Rourke said that the driving force behind his decision was his wife Amy, who supported him after he lost to Sen. Ted Cruz (R-Texas), who told him that if he didn’t run, “You didn’t do everything you could.”

So while they presented a united front, there’s one big question remaining from the spread. Does Beto’s dog want him in the race?

O’Rourke was shot by Annie Leibovitz for the magazine, and the famous photographer caught a couple of haunting looks of concern from Artemis.

HAS ANYONE ASKED THE DOG IF BETO SHOULD RUN I AM JUST SAYING pic.twitter.com/L8OmB70M0j

It’s almost like he knows his owner is about to be away from home for the next two years, after having traversed the state of Texas for much of the past year.

Or he just doesn’t like Beto’s odds? Dogs sense things in advance of humans. Is he aware of an impending shellacking? Artemis was in almost every shot of Leibovitz spread. In all of them, he doesn’t necessarily look happy.

But it raises a bigger question: Will America elect a man with a dog named Artemis? The last few presidential dogs had much simpler names, like Sunny and Bo, Barack Obama’s pups. George Bush had Spotty and Barney. Bill Clinton had Buddy.

For all the attempts at being a “down to the earth” man of the people, naming your dog after a Greek goddess is some bourgie affectation that maybe won’t play out in Ohio or Arkansas.

Or maybe it proves O’Rourke is anathema to the pandering most politicians adopted, unabashedly exposing his nerd side in picking a name for his dog?

Either way, best of luck. We’re here for you regardless, Artemis.