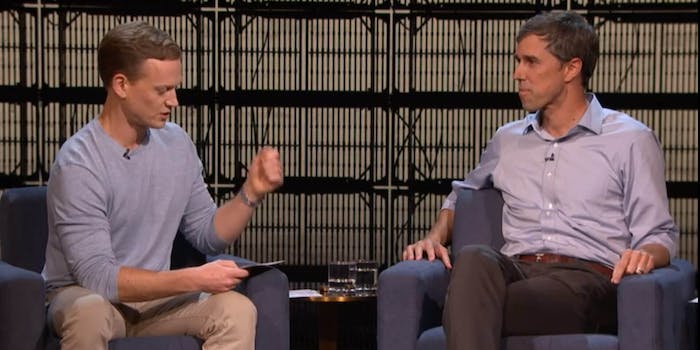 They're betting on Beto.

The Pod couldn’t save Beto.

In the aftermath of President Donald Trump’s election, perhaps no pundits benefited as much from the #resistance as the men behind Pod Save America. Former Obama staffers Jon Favreau, Jon Lovett, Tommy Vietor, and Dan Pfeiffer have not only built one of the most successful political podcasts in history, but they also leveraged that success into the creation of their nascent media empire Crooked Media.

Pod Save America sells its fans left-leaning political analysis coated with humor and wonky authenticity. After all, these men were on the inside of the Obama White House, and they know how things work in Washington.

But if the legitimacy of their punditry is based on knowing how things work, then it is worth discussing when they get things wrong.

Though Pod Save America was just as confident as many pundits that Hillary Clinton would win the presidency, its early, vigorous support of Democratic presidential challenger Beto O’Rourke marks its most glaring miscalculation to date. Whereas most of the mainstream media thought Clinton would be president, on O’Rourke, the PSA hosts were on a limb alone.

In O’Rourke, the former Democratic representative of Texas’ 16th district who almost took a senate seat from Ted Cruz, the Pod boys saw a Great White Hope. They were big supporters of O’Rourke’s Senate bid. He appeared on the show in March and October of 2018, and also appeared on the podcast spin-off Lovett or Leave It in 2017.

Following O’Rourke’s narrow Senate loss, the hosts of Pod Save America got behind him as the heir to Obama-era politics and their presidential candidate of choice.

It’s easy to see why he would appeal to its brand of politics. O’Rourke, like Favreau and company, is a pragmatist who dreams of bridging the partisan divide with common sense solutions. Beto and PSA’s politics focus on moderate proposals and Democratic consensus issues. For example, in 2018, Favreau infamously joined the anti-Medicare for All organization, United States of Care, and O’Rourke has hedged on single-payer as his campaign has gone on.

Not only is this not the cycle for a candidate like O’Rourke, but what support there even was for him has been hoovered up by South Bend, Indiana, Mayor Pete Buttigieg. So far, Mayor Pete has played Beto better than Beto, running as his earnest heartland moderate.

Mayor Pete seems to have rendered O’Rourke irrelevant, as he now often doubles or triples O’Rourke in polls.

There is nothing wrong with backing a candidate, but if your job is to get it right, how could they get it so wrong?

From the fall of 2018 through the middle of 2019, Pod Save America’s four hosts were serving as de facto O’Rourke surrogates and believed that the former El Paso congressman had a very good chance of winning the presidency.

If current trends hold, that prediction will prove to be disastrously wrong. Let’s look at how the PSA hosts got on the Beto bandwagon, and the ensuing chaotic six-month ride.

Beto is a generational political talent who built a grassroots movement. Every Democrat can learn a lot from how he ran his race with authenticity and without fear.

I hope we haven’t heard the last of him. https://t.co/oafrW9An5i

O’Rourke appeared on Pod Save America’s short-lived HBO effort last year. The interview with him, conducted by Vietor, was largely geared toward the Texas Senate race. But, at the end of the interview, there’s an early hint that PSA is in on O’Rourke’s presidential aspirations.

Vietor asks, “How do you run against a liar? I’m asking for a friend who may be running in 2020.” Though the answer is initially about Cruz, Beto uses the opportunity to pitch his tactics against Trump.

Vietor follows up by pushing the presidential race.

“A few years ago, you didn’t have this national profile, but today 800,000 people gave your campaign money. A whole lot of people want you to run for president. What does that feel like and what does it say about the state of the Democratic party and what we’re hungering for from our politics in this country?”

The next month, after O’Rourke lost, more explicit support came in the form of PSA co-host Dan Pfeiffer’s essay, “The Case for Beto O’Rourke.” From start to finish, the piece deeply misreads how the 2020 primary will take shape.

First, he points to “enthusiasm.” He argues that the enthusiasm around O’Rourke’s run was about Beto and not just his highly unlikeable opponent Cruz or the broader anti-Trump movement. He says, “If Beto were to go to Iowa City next week, I am confident he would draw a crowd three times larger than any candidate has since Obama first stumped there.”

In the piece, Pfeiffer also says, “The O’Rourke campaign in Texas was essentially an Iowa Caucus campaign on a grander scale. He visited every one of Texas’s 254 counties…Beto just proved he has what it takes to win Iowa.”

Recent polling has O’Rourke around 10th place in Iowa, despite a significant investment of time and energy there. Though there have been claims that Sen. Bernie Sanders, Sen. Elizabeth Warren, and Buttigieg are drawing the biggest crowds, O’Rourke is not.

Finally, Pfeiffer argues that O’Rourke’s campaign is on the cutting edge of the “campaign-innovation” curve. He points to his digital advertising and live-streaming as proof that he understands technology in a way other candidates don’t. Whether you look at Warren’s selfie lines or Sanders’ BERN app, it seems that older candidates have adapted to new technology just fine.

Pfeiffer’s prediction turned out to be doubly incorrect, as O’Rourke’s campaign gained a reputation for disorganization as it ramped up in Iowa. He was criticized for announcing his presidential bid before hiring a campaign manager and insisted on driving himself to campaign events.

Politico called him, “far behind rival candidates in staffing and organization.”

I consider this a boon to Beto https://t.co/tdge1XneRo

Not only did the hosts signal their support for O’Rourke, but they also became business partners with him. In March, Running With Beto, a feature-length documentary about O’Rourke’s Texas senate run, debuted at SXSW. Crooked Media was a producer on the project.

It doesn’t take a cynic to conclude that Running With Beto was an attempt by Crooked to jumpstart interest in an O’Rourke presidential campaign. The Atlantic’s Megan Garber called the film, a “sales pitch,” adding that the film “often has the feel of an infomercial whose miracle product is a lanky resident of El Paso.” The Guardian’s Dream McClinton wonders if O’Rourke is presented as “a little too endearing.”

Crooked Media’s role in the documentary raised the eyebrows of some fellow journalists and pundits.

for those who may not know what this refers to:
in other words, the Pod Save America hosts and their company have a financial stake in generating attention and positive campaign movement to @BetoORourke, for the sake of how well this movie does pic.twitter.com/SBsw7rppMs

From March through June, the Pod Save America hosts often played defense for O’Rourke, serving as surrogates for the candidate in the media and on Twitter.

Providing comment to the Los Angeles Times, Pfeiffer doubled down on his essay from November. He said, “Beto is a tailor-made Iowa candidate. He ran Texas like a giant Iowa campaign—visiting every county, retail politics.”

Vietor went on the Young Turks to dispute that O’Rourke has come out against Medicare for All. In the clip, Vietor pushed back on the idea the O’Rourke opposes M4A claiming “there are literally 10 plans” to choose from.

On an episode of Lovett or Leave It, Lovett got defensive at the idea that the podcasters were serving as O’Rourke surrogates.

After sarcastically referring to Beto as, “supposedly our best friend,” Lovett said, “The national media has sort of lost its mind a little bit. Like, first of all there’s like, roadblock coverage—he’s getting a lot more coverage than other people. But then there’s a lot of reporters who are just, like openly hostile for reasons that are not…some of the stuff on Twitter has been, holy shit!”

In late April, Favreau got into a back and forth with the Sunrise Movement on O’Rourke’s behalf over the details of his support of the Green New Deal.

I am now very confused. Per @drvox, the GND resolution does not call for net zero by 2030, and yet the @sunrisemvmt just criticized Beto’s plan for not reaching net zero by 2030. Am I missing something?

Right. The goals in the GND resolution are net zero by 2050, and the 10 year mobilization language is exactly what’s in Beto’s plan.

If @sunrisemvmt has an issue with the GND resolution, you should just say so.

In May, NBC reporter Jonathan Allen mocked the trend of “saying something nice about a candidate so far behind them in the polls that it can’t hurt them,” and two co-hosts came for him on. Allen called them O’Rourke’s “shadow spokesmen.”

I didn’t mention O’Rourke in my tweet about democratic candidates saying nice things about each other — nor did I say they didn’t mean the things they were saying — and yet O’Rourke’s shadow spokesmen were quick to start messaging to their followers. Word of the day is “cynicism” pic.twitter.com/1Ks6RNd8qW

But, by late May, it seems that the hosts’ enthusiasm for O’Rourke started to wane: their Twitter defenses become infrequent, their bets seem hedged. It appears that they have accepted their de facto endorsement of O’Rourke did not bear fruit.

In June, Vietor interviewed O’Rourke once again on Pod Save America, but with a far less collegial tone than before. The fairly dry conversation has the feel of an exit interview. Vietor invited O’Rourke to present his immigration and climate policies, which are middle of the road among Democratic candidates, as well as his “Medicare for America” proposal.

Vietor also asked Beto to justify backing away from Medicare for All, which several months earlier he had told the Young Turks O’Rourke was not doing.

The host then allowed O’Rourke space to grouse about his poll numbers and vaguely blame the referees. “I’m loathe to second guess how I would do this differently,” O’Rourke said, “but you just want to make sure that every one of these candidates has a chance to make their case.”

@mattyglesias "O’Rourke attracted huge crowds to his rallies, built a massive grassroots fundraising machine (in part thanks to many favorable plugs from Pod Save America)"

I mean, I'll take the credit but the tweets from LeBron, appearance on Ellen, etc probably helped a bit

The Pod Save America hosts are guilty of a classic mistake. As the saying goes, “soldiers are always preparing to fight the last war.”

From Vietor’s enthusiasm on the eve of O’Rourke’s loss to Pfeiffer’s article to all four hosts’ various social media defenses, it is obvious that they saw in Beto something of what they saw in Obama in 2008. What they could not see is that the conditions have changed.

One portion of the Democratic electorate seems to want stability in the face of Trump, hence Biden’s high numbers. Another percentage of primary voters want bold, progressive change: if you add up Warren and Sanders’ percentages, you get a nice chunk of voters.

No one, it seems, necessarily wants a pragmatic young man to unite us with his charisma. It may be the when voters see an “Obama-type” they also see someone who is not Obama.

Favreau, Vietor, Lovett, and Pfeiffer presented a thesis that a young, charismatic candidate with moderate policies would win primaries and galvanize the electorate. With all three leading candidates over the age of 70, and two of the three being unabashed progressives, it is clear that they were wrong.