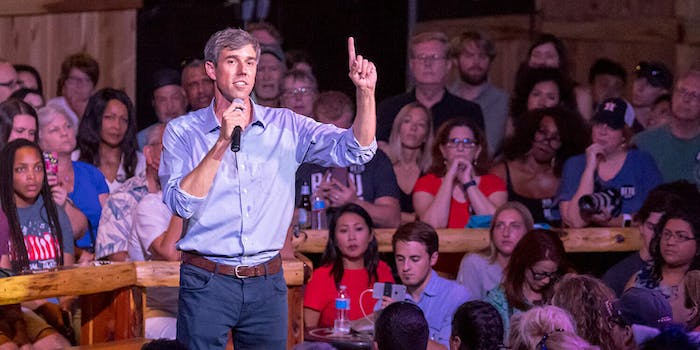 The Texas Civil Rights Project shared it on Twitter.

A fake letter threatening a $500 fine for displaying signs in support of U.S. Senate candidate Beto O’Rourke is circulating in College Station, Texas, according to the Austin American-Statesman. The Texas Civil Rights Project is investigating the reports.

The Texas Civil Rights Project obtained a copy of the letter, and is encouraging any other to recipients to call their election protection hotline, at 866-OUR-VOTE. The letter starts with a “citation warning” which reads “Any ‘BETO’ signs must be removed or you will receive $500.00 fine. This man is not worthy of running for any office in the State of Texas. Here are some quick facts about this individual. Texas voters please wake up.”

The Texas Civil Rights Project shared a photo of the letter and the envelope it was mailed in on Twitter Tuesday, with a warning that the letter is fake. The letter includes a list of “quick facts” about O’Rourke, including that he is “not Hispanic,” his “felony arrest record,” “insider trading violations,” “father’s drug scandal,” and “family business federally prosecuted.” The letter ends with a sentence reading “these issues have not been effectively reported to Texas voters.”

The top of the letter has the logo for Texas.gov, the official website of Texas. The envelope return address displays a fake Austin address, but the letter seems to have been sent through a post office in North Houston, according to a conversation the Statesman had with Beth Stevens, the voting rights legal director of the Texas Civil Rights Project.

“We released it publically to let folks know about some of the issues with the mailer and why it is, in fact, illegal and not true,” Pérez told the Batallion. They hope to take the issue up with state officials.

A spokeswoman for the campaign of Sen. Ted Cruz told the Statesman it was not responsible for the mailer, and O’Rourke’s campaign declined to comment.