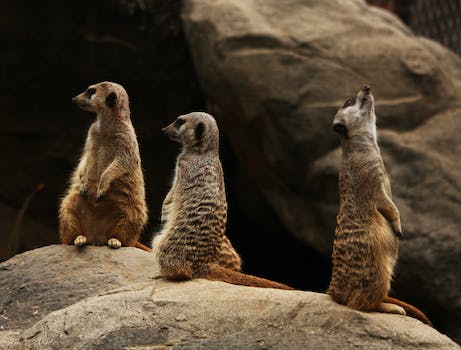 The apps that are making Meerkat work

Meerkat finally gave us a Chatroulette without any genitalia. (So far.)

For many apps on the rise, like live broadcasting service Meerkat, the biggest problem is growth. Users jump on and off board, frustrated largely by the fact that there’s no one else there, or if there is, they can’t find them. It’s a problem Twitter has faced since its inception and one it still hasn’t cracked.

But Meerkat is now going through a sink or swim moment after Twitter decided to cut off its access to its social graph. And for good reason: Twitter has a competing product called Periscope that will be launching soon and was live-demoed in the U.K. for the first time yesterday.

After the social graph news broke, Meerkat’s CEO and cofounder Ben Rubin more or less shrugged it off. But it was a problem that Rubin had been thinking about since the app’s inception (less than a week later, Meerkat introduced “light following via Web” so anyone can find you).

On a panel at SXSW with Yahoo’s David Pogue last week (before Twitter cut Meerkat’s access) Rubin shared his excitement about a bunch of third-party aggregator sites already in full operation fewer than 20 days after the core app was released.

Rubin gave a special hat tip to Meerkat Streams, a marketplace of sorts to find the best streams to watch. He also mentioned two other sites: Katch and Watch Meerkat.

Meerkat Streams’s most useful feature is the “Upcoming” page, which tracks popular streams that are gaining a lot of subscribers before the broadcast actually happens. Katch essentially works as a way for creators to take their streams beyond the live broadcasts—a DVR of sorts. When the broadcaster adds #katch to their stream announcement, Katch records the whole stream and automatically sends you a YouTube video after it’s done. 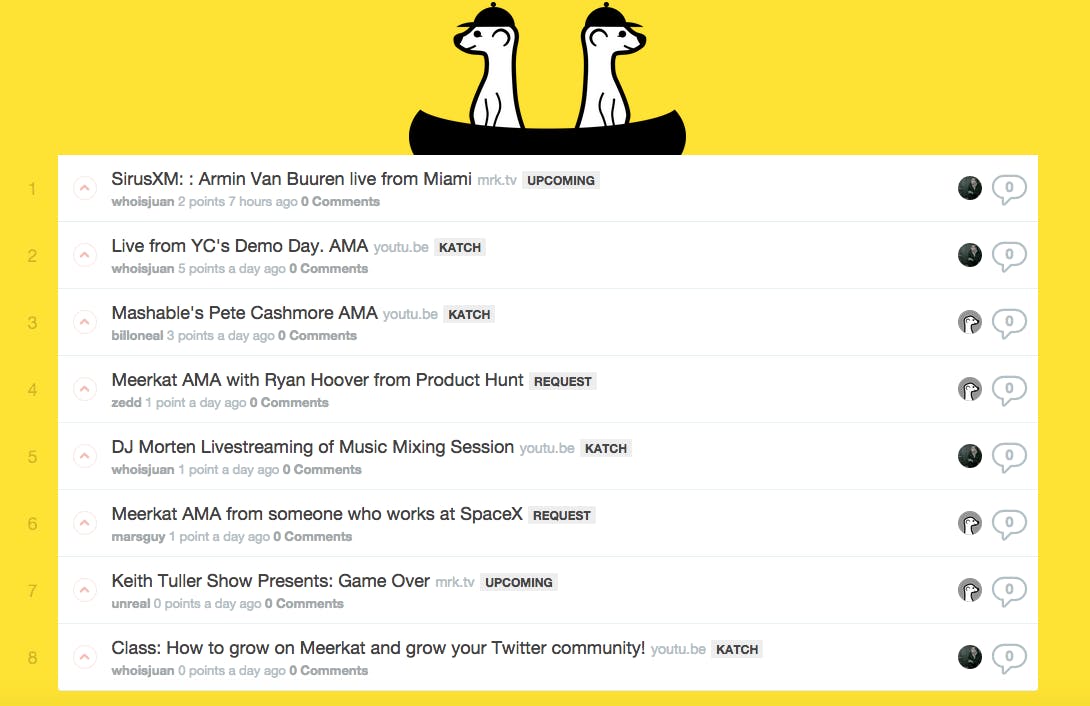 There’s also Suricate (a nice little hat tip; it’s another name for meerkat, as in the animal). The site is a just-launched, Reddit-like community site for Meerkat users to request streams that they’d want to see, share YouTube clips of broadcasts recorded by Katch, and advertise upcoming streams. It’s in its infancy, but it’s just one more site trying to make sure you don’t miss a video of some tech bros speaking at a panel.

Thanks to a boost from the tech curation site Product Hunt, one Meerkat site is already becoming popular on its own. Meerkatrouelette takes the random familiarity of Internet classic Chatroulette and blends it with the blurry realness of Meerkat. The site was made by French developers Laurent Sigal and Jeremie Rouah.

The two say that they were immediate fans of the live-streaming platform but couldn’t find any way to watch outside of clicking links of people they already knew on Twitter.

“Often, these links led to a stream that was over,” Sigal said. “We decided to build a way to loop through all streams that are currently live over the weekend: Meerkat Roulette was born.”

Rouah described one of the main problems with discovery based on an existing social graph—it’s people you already know. “We used Meerkat Roulette to see events and random walks in Russia, Dubai, etc,” he said. “If you encountered tweets in Chinese which you did not speak, you wouldn’t bother trying to read them right? Well we can’t resist watching a Chinese kid playing with a dog, even if I have no idea what they are saying.”

They’ve taken that international worldview and applied it to a new mode they describe as a “god mode” of Meerkat Roulette. It’s an interactive map of the world that shows all of the active streams going on at that time.

Part of the reason Meerkat has been such a hit is its utter simplicity. But that means something’s been missing: By being so barebones, we weren’t sure how to… well, use it. And now? Outside developers are laying the groundwork to create a Meerkat infrastructure we can navigate.

It’s a welcome layer of organization to a cluttered network. And hopefully for Meerkat, it’s only the beginning.

Photo via Rennett Stowe/Flickr (CC BY 2.0)