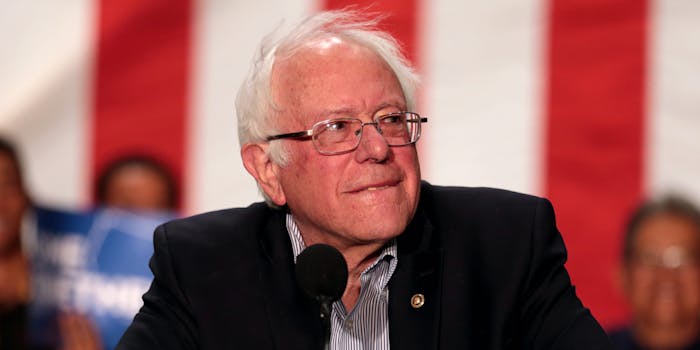 Why teens love Bernie Sanders so much

The scene looked like a Gen Z version of Beatlemania last Wednesday, as the throngs of teens who had taken to the National Mall for National School Walkout Day were cheering wildly, crying out ecstatically, for one of their favorite celebrities. Was it Drake? Rihanna? Post Malone? One of those dang One Direction boys?

No. It was Bernie Sanders.

The end of @SenSanders 1st speech in DC #NationalWalkoutDay pic.twitter.com/zaBWoaGrCS

Why are the teens going crazy for Bernie? Yes, the Vermont senator does have a certain normcore grandpa appeal. But, it’s not like Sen. Chuck Grassley (R-Iowa) or Sen. Ben Cardin (D-Md.) get that kind of love in public despite also being grandfatherly types themselves. It’s hard to imagine teens breaking out in a “We want Chuck!” chant or shouting “We love you, Ben!” with a teeny bopper swoon.

On the other hand, when asked how it felt to be there with him on Wednesday, one teen told Splinter’s Emma Roller, “We got to touch God.”

Bernie’s frumpery is only part of his appeal. He also offers a policy program that directly speaks to the teens. And, with their low tolerance for bullshit, the teens know authenticity when they see it. So much is written about the importance of the youth vote, and particularly how young people not voting ruins the chances of the liberal agenda. But, very few candidates offer a platform that speaks to the teens. There is no other national politician who speaks to the youth with the clarity and sincerity of Sanders.

That’s why the teens love him.

It would be easy to write off free college as an empty campaign promise if Bernie weren’t still pushing for it today. Sanders understands that changing the context of college in America is deeply important if we’re to have a future with lessened income inequality, and he has continued to push for it since his unsuccessful presidential bid.

While it’s easy for those who have already been through college to handwave away the massive student loan debt that is only increasing with each passing year, it’s understandable that today’s teens may want to avoid beginning their careers with a net worth in the negative tens of thousands of dollars. In 1987, a four-year college education averaged about $40,000. Today, that average is over $100,000.

It shouldn’t surprise you that one of the most aggressive outlets in covering Sanders’ continued push for free college has been Teen Vogue. While traditional newspapers aimed at the middle-aged, upper-middle class frame the story with headlines like “Who Pays for Bernie Sanders’ Free College Tuition Plan?,” outlets like Teen Vogue source quotes like this from Beana Ross, the President of the United States Student Association, who says:

“The average student graduates with over $37,000 in student debt, making what many call the American dream near impossible. As a black woman who has made it to and through the higher education system, I know the importance of higher education to success and opportunity. We need the College for All Act to dismantle just one of the systems of oppression that prevents our communities from achieving and succeeding in higher education.”

It’s safe to say the difference in perspective there is evident.

In 2016, Politico ran a story with the unfortunate headline “Why Bernie Sanders is Obsessed with 17 Year-Olds.” Despite that creepy line, the first words of the piece are incredibly telling.

“Travis Stanger landed on Bernie Sanders’ radar last summer when, at age 17, he started donating $3 a month from his part-time job as a McDonalds’ cashier.”

To more centrists candidates in the Democratic Party, who view their base as “middle-class families,” the minimum wage is a matter of tinkering, some kind of experiment without a real-world impact. Recently elected centrist congressman Conor Lamb (D-Penn.) summed up the rank-and-file Democratic opinion on the minimum wage recently when he said that $15 an hour, “sounds high based on what I’ve been told by many small-business owners in our area.”

Think back to your first job working for a small business owner. Do you want to be told that the owner of the mini-golf course or ice cream shop where you work doesn’t want to give you a raise, so you don’t deserve it, or do you want to be told you’re going to get five more dollars an hour for mopping a bathroom floor?

This is a fairly simple point to make, but the longer you are going to have to stay on Earth, the more concerned you are about keeping it in good shape. This has been easily evidenced by a Trump administration that is filled with aging Baby Boomers and has made it a priority to loot national parks, deregulate oil and gas industries, and generally pollute as much as possible if it means turning a dollar.

On the flip side, this point is again proven by the deep concern that teens have for climate change. One groups of teens is actually suing the Trump administration over the issue, as they believe the support of fossil fuels infringes on their right to “life, liberty, and the pursuit of happiness.”

They aren’t the only ones. Students at colleges across the country have joined a movement to force their schools to divest their endowment from fossil fuel companies. Activists at some small universities have already successfully won the divestment battle, and at larger universities like Harvard, support the effort grows every day.

It’s not hard to see why teens identify with Bernie’s official position on climate justice, which reads:

“The scientists are virtually unanimous that climate change is real, is caused by human activity, and is already causing devastating problems in the United States and around the world … While fossil fuel companies are raking in record profits, climate change ravages our planet and our people—all because the wealthiest industry in the history of our planet has bribed politicians into ignoring science.”

In addition to all of this, Sanders has a biography and record to back up his positions. As the late Erica Garner once observed, “Bernie is a protestor.” He continues to show up a grassroots events around the country, from No DAPL rallies to the Nissan organizing effort in Mississippi.

He has also held the same views for decades, a sharp contrast with many national political figures. During the primary, several videos splicing together decades of Bernie’s speeches on income inequality went viral, as young people across the country were moved by his incredible consistency on the issues.

The next logical question, then, is if Bernie’s popularity is repeatable. The answer is absolutely yes, because Bernie is actually repeating someone else’s strategy. U.K. Labour Party leader Jeremy Corbyn a.k.a. Jezza a.k.a. “The Absolute Boy” has such a high level of love from teens in the U.K. that his party is actively trying to lower the voting age to 16. His popularity has also led to the writing of articles like “Teens Explain Why Jeremy Corbyn is Daddy.”

The explanation for Jezza’s daddy-like qualities is the same as the explanation for why teens screamed, “It’s Bernie Fucking Sanders!” at the Capitol on Wednesday. Corbyn speaks directly, clearly, and authentically to their material interests.

Writing in the Guardian the day after Tory Prime Minister Theresa May narrowly avoided an embarrassing defeat in a snap election that she called, Rhiannon Lucy Cosslett outlined why the youth vote went to Jeremy Corbyn in record numbers, and her points are shockingly familiar.

She identifies that the youth support Corbyn because he supports free tuition, defends low medical costs (U.K. citizens free healthcare), critiques nationalism and isolationism, and advocates the expansion of the social good. Corbyn is also aggressive on climate and he advocates a minimum wage increase.

Cosslett also suggests that Corbyn is “memeable,” but I’ll differ from her there and suggest that if you offer the teens a program that speaks to their material good, the memes will follow.

Get you a man who can do both, etc etc pic.twitter.com/p7BxZ97BjX

Many on the left have asked who the next Bernie will be? Liz Warren? Keith Ellison? Nina Turner? Much of the conversation around picking a successor to the 76 year-old Vermont socialist has been about personality. But, the evidence indicates that the teens aren’t interested (only) in personality. If you want to be beloved by the teens, all you have to do is go out and earn it.

If you build good policy, the teens, and the memes, will come.