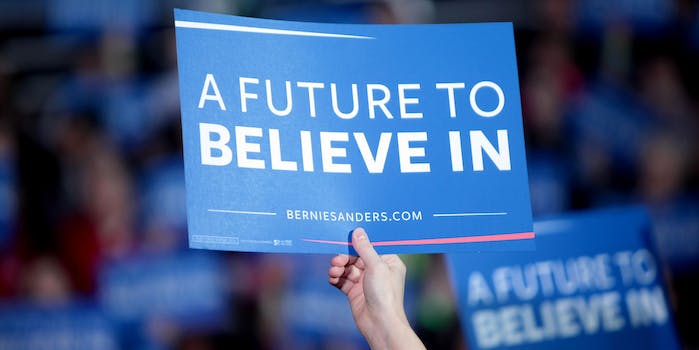 The statement follows reports of violent threats from Sanders supporters.

Bernie Sanders on Tuesday stoked the flames of discontent that some fear are melting the Democratic Party from within.

In a statement released Tuesday afternoon, Sanders accused party leaders of unfairly disadvantaging him at the chaotic Nevada Democratic Party convention on Saturday and condemned critics who say his campaign promoted violence among his supporters.

Sanders’s comments serve as an argument for both the independent Vermont senator’s candidacy and the notion that the Democratic Party establishment has rigged the system in favor of challenger Hillary Clinton.

“The Democratic Party has a choice. It can open its doors and welcome into the party people who are prepared to fight for real economic and social change—people who are willing to take on Wall Street, corporate greed, and a fossil fuel industry which is destroying this planet,” Sanders said. “Or the party can choose to maintain its status quo structure, remain dependent on big-money campaign contributions, and be a party with limited participation and limited energy.”

“The Democratic Party has a choice. It can open its doors and welcome into the party people who are prepared to fight for real economic and social change.”

“You are a sick, twisted piece of shit, and I hope you burn for this!” one of the voicemails said.

Sanders, who has called for a “political revolution” to accompany his candidacy, did not address specific reports of threats but rejected the notion that his supporters have a “penchant for violence.”

“Within the last few days there have been a number of criticisms made against my campaign organization,” Sanders said. “Party leaders in Nevada, for example, claim that the Sanders campaign has a ‘penchant for violence.’ That is nonsense. Our campaign has held giant rallies all across this country, including in high-crime areas, and there have been zero reports of violence.”

The consequences of the upheaval in Las Vegas have sparked a larger narrative about infighting between the Sanders and Clinton wings of the Democratic Party. In response, Senate Minority Leader Harry Reid met with Sanders to convey what he sees as the potential fallout of a widening rift between the Sanders camp and the rest of the party.

“I laid out to him what happened in Las Vegas,” Reid told the Washington Post prior to the release of Sanders’s statement. “I wanted to make sure that he understands, that he heard what went on there—the violence, and all the other bad things that has happened there. He said that he condemns that, and I’m confident he does. I’m confident he will be saying something about it soon. This is a test of leadership as we all know, and I’m hopeful and very confident that Senator Sanders will do the right thing.”

The chaos of the Nevada Democratic convention began early on Saturday morning and lasted 16 hours before police and security at the Paris hotel-casino in Las Vegas shut the event down as Sanders supporters protested.

Echoing supporter complaints, Sanders said Democratic officials in Nevada unfairly tipped the scales in favor of Clinton, a former secretary of state and the Democratic presidential front-runner, by improperly passing a vote for a change to convention rules, blocking the consideration of petitions from Sanders supporters, and denying 64 Sanders delegates to the Nevada convention on flimsy pretenses.

According to the final tally of the convention, Clinton had 1,695 delegates while Sanders had 1,662. But Sanders supporters say it was an incorrect count due to leadership’s refusal to recount and a thin enough margin that the 64 delegates who were denied entry because, party officials said, they did not register as Democrats by the May 1 deadline should have been counted.

The results of the convention ultimately resulted in Clinton—who won 13 delegates in the Nevada Democratic caucus in February while Sanders won 10—netting four more delegates, while Sanders gained three.