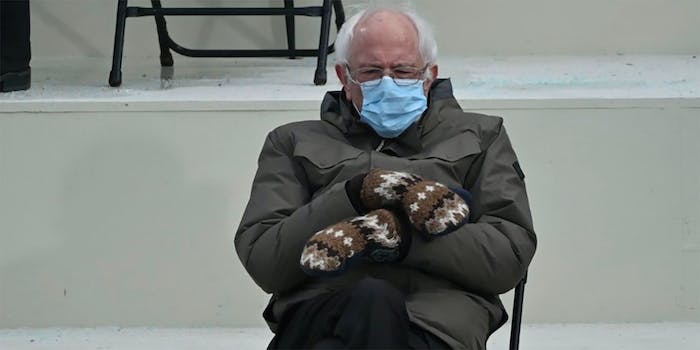 Sensible coat? Check. Mittens made from repurposed wool sweaters and lined with fleece made from recycled plastic bottles? Check.

Inauguration Day is an outdoors, winter-in-D.C. affair, and although some attendees aim for making a fashion statement, some are Bernie Sanders. As reaction memes showed on Wednesday, though, the choleric former presidential candidate and longtime senator from Vermont wore the hell out a sensible coat and mittens, and the internet loved him for it.

Sanders arrived at the Capitol on Wednesday morning to see the inauguration of Joe Biden and Kamala Harris, wearing mittens that got noticed right off the bat.

Ruby Cramer noted that they were a gift from a Vermont teacher, and “they are made from repurposed wool sweaters and lined with fleece made from recycled plastic bottles,” because of course they are.

As someone rolling with a T.S. Pumpkins alias observed in response, “I feel like that’s 100% unsurprising re: Bernie Sanders. Someone hands him some mittens & he says ‘oh yes, thank you’ and those are his mittens now, they go in his coat pockets when he’s done and the coat goes back in the coat closet for the summer and it starts over next winter.”

Another Twitter user, with the amusing name @AliseNavidad, extrapolated from the mittens a narrive that had “Bernie Sanders rolling up in a 1997 toyota corolla, coffee cups spilling out of his car, grabbing a manila folder full of receipts and tossing a lozenge in his pocket before running to his seat exactly 1 second before the inaug,” adding, “I just want everyone to know I tweeted this from a place of utmost respect.”

Sanders’ sensible coat also got some attention. As self-professed “world’s biggest Ulysses S. Grant fan” Cameron Newton surmised, “Everyone else: wearing giant, dressy black and grey coats; Bernie: This is my good jacket, and it keeps me warm. I’m wearing it.”

Of course, we’ve seen that coat before from a popular meme featuring Sanders “once again asking”—but as Brandy Jensen observed, “A person only needs one good coat.”

Sanders then assumed a pose that is destined for once and future memedom, with one person interpreting it to mean, “We are all Bernie Sanders today.”

Dan Lempert pledged allegiance to Sanders-styled grumpiness, noting, “Bernie never looks happy to be anywhere & that’s why he is my king.”

Netflix’s Marc Sneitker interpreted the look as “when I’m early for a movie but didn’t bring a book.”

Anne T. Donahue tagged it as “me long after the pandemic, happily mingling at a party.”

And Time senior editor Alex Fitzpatrick called the look “me when it’s time to go to events again after over a year getting used to not doing a single thing.”

Well, at least this year’s edition of the parade isn’t outside.