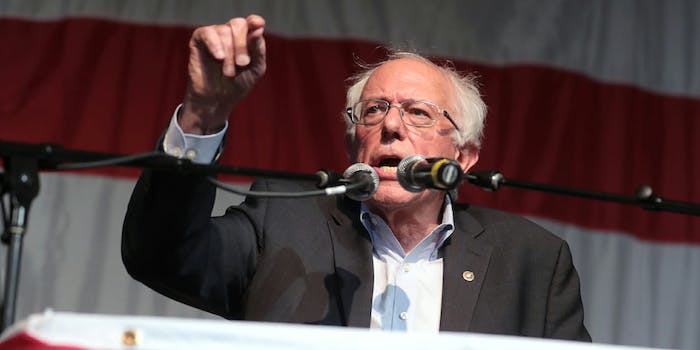 The plan is sweeping.

2020 Democratic presidential hopeful Sen. Bernie Sanders (I-Vt.) announced a sweeping plan on Thursday to combat climate change that promises to create millions of jobs and have the environment “factored into virtually every area of policy.”

The plan, called the Green New Deal, hopes to have the country reach 100 percent renewable energy for electricity and transportation by 2030 and decarbonize by 2050, spending $16.3 trillion toward those efforts. As part of the plan, Sanders called for creating 20 million jobs in sectors like manufacturing, construction, retrofitting, coding, and renewable power plants.

“The climate crisis is the greatest challenge facing humanity. It’s also our single greatest opportunity to build a just and equitable future,” Sanders wrote in a tweet. “We are going to create 20 million jobs and an economy that works for all. It’s time for a #GreenNewDeal.”

The climate crisis is the greatest challenge facing humanity. It's also our single greatest opportunity to build a just and equitable future.

We are going to create 20 million jobs and an economy that works for all.

It's time for a #GreenNewDeal. https://t.co/NteQAl2D7M

Sanders said the plan would be paid for by having the fossil fuel industry pay for pollution and eliminating subsidies they receive. It also calls for scaling back military spending, collecting income tax on the new jobs created, and having wealthy Americans and corporations “pay their fair share.”

The plan also calls for helping workers in fossil fuel sectors by paying for five years of unemployment insurance, a wage guarantee, job training, and housing assistance, among other things. Sanders also proposes $2.18 trillion in grants for low- and moderate-income families and small business to encourage them to weatherize and retrofit homes and businesses.

Part of the plan also proposes overhauling the country’s transportation system, including providing grants to low- and moderate-income families to trade in fossil fuel-using cars for electric ones, and to schools to switch their buses to electric. It also calls for investing $300 billion in public transit.

The Vermont senator’s plan comes two weeks ahead of a climate crisis town hall hosted by CNN. Sanders is one of many Democratic 2020 hopefuls who have said they will participate in it.