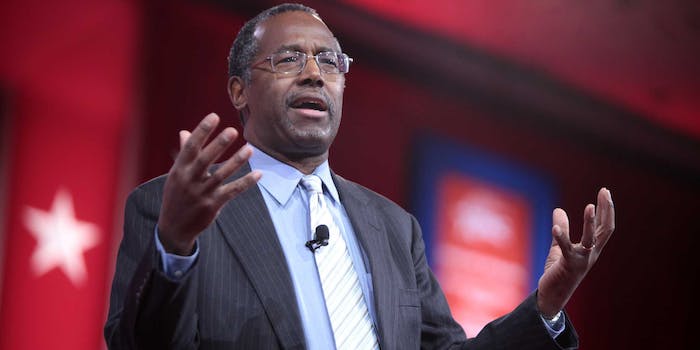 'Congress is a different story.'

Many in the Republican party have made it clear in recent days how they feel about Islam and those who practice it.

But Ben Carson—who ranks, depending on the poll, as either the second or third most popular Republican gunning for the presidential nomination— took another step Sunday morning when he told Chuck Todd on NBC’s Meet the Press that a Muslim should not hold presidential office.

“I would not advocate that we put a Muslim in charge of this nation,” Carson said. “I absolutely would not agree with that.”

Todd asked if a person’s faith should matter to voters.

Asked by Todd if Carson believes the Islamic faith and those who practice it are consistent with the constitution, Carson said, “No, I do not.”

This hasn’t been a unique view for those in the GOP.

Donald Trump declined last week to correct a questioner at his New Hampshire rally who said President Obama is a Muslim, and when the man asked when the country “can get rid of” of all Muslims, Trump responded by saying, “We’re going to be looking at that.”

Some in the Republican party—Sarah Palin and Ted Cruz, for instance— haven’t been so sympathetic to the plight of 14-year-old Ahmed Mohamed, who was arrested last week for bringing a clock to school.

But on Sunday, Carson—who said he believes Obama is a Christian and an American—wasn’t so absolute about his Islamic opposition when Todd asked him if he would vote for a Muslim for Congress.

“Congress is a different story,” he said. “It depends on who that Muslim is and what their policies are. …If there’s somebody who’s of any faith but they say things and their life has been consistent with things that will elevate this nation and make it possible for everybody to succeed and to bring peace and harmony, then I’m with them.”

As for Trump, on Saturday he defended himself from those who gave him heat for not correcting the questioner about Obama.

Photo via Gage Skidmore/Wikimedia (CC BY 3.0)