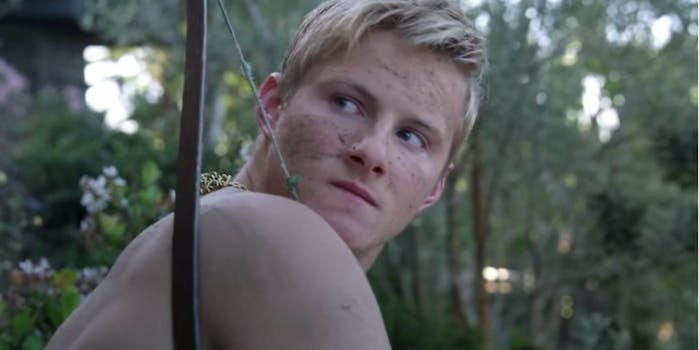 You think ‘Game of Thrones’ is bloody? Watch this battle of the apps

There’s only room at the top for one app

It looks like the beginning of an episode of Entourage, but instead of Turtle and Johnny Drama lounging poolside at a California hilltop mansion, it’s another roster of cocky characters: Tinder, Instagram, Snapchat, and other top apps are having a fancy soiree.

“For years, no one dared to compete. Until one app took matters into his own hands,” a voiceover intones, showing a handsome blonde guy decked out in survival wear, sharpening a knife, like a more studly Peeta from the Hunger Games series. Or, more accurately, he looks like ruthless villain Cato from The Hunger Games… because he’s played by Alexander Ludwig, who played Cato in The Hunger Games. Then the mayhem begins.

This is an add for Tickr, an app that basically exists to keep you up-to-date on other apps (which makes the whole “must kill all other apps” theme of the video weird). Tickr creates a ticker of updates from a variety of different sources, from apps like the ones shown in battle to stock markets and news outlets.

Though the video topic doesn’t totally fit with what Tickr’s actual purpose (streamlining other apps and services into one easy-to-digest news ticker), it’s… you know, mildly amusing.