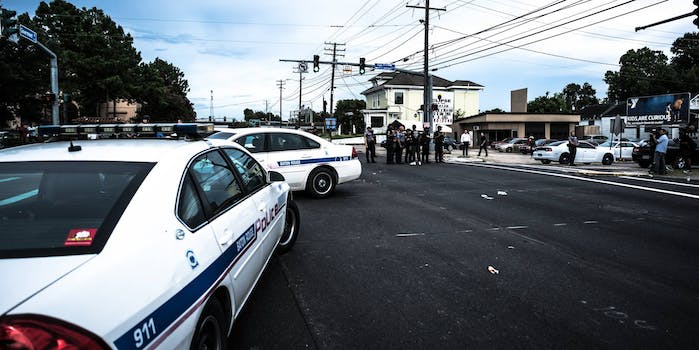 It appears the shooter, who intentionally targeted police, acted alone.

The shooting took place less than a mile from police headquarters in the Old Hammond area of Baton Rouge. The exact number of officers killed and wounded was not immediately clear.

The East Baton Rouge Sheriff’s Office issued an update later on Sunday morning confirming that three officers had been killed and that one suspect is dead. A fourth officer reportedly passed away on Sunday afternoon, according to New Orleans NBC affiliate WDSU. Reports have been conflicting, however.

An unknown number of wounded officers are reportedly in critical condition.

The shooting in Baton Rouge comes ten days after five police officers were shot and killed by a lone gunman in Dallas, Texas.

The shooting also follows more than week of protests in the Baton Rouge area over the shooting of 37-year-old Alton Sterling, whose death while unarmed at the hands of two police officers was captured in a graphic bystander video.

The East Baton Rouge Sheriff’s Office issued a statement on Facebook regarding the incident:

It’s unclear if any suspects have been taken into custody. Police have declared the scene “active, but contained.” and issued an additional update via Facebook post at 11:23am CT.

Update 11:33am CT, July 17: This piece has been updated to reflect the total confirmed number of fatalities.

Update 11:36am CT, July 17: A corporal with the Baton Rogue P.D. said there were multiple suspects at large: an individual wearing black and another dressed in military fatigues. Police emphasized it was unknown if the additional suspects were involved—they are considered persons of interest. One suspect was confirmed dead; his body, however, had not been recovered. Police are sending in a robot with a camera to confirm there are no explosives on the body.

Update 11:49am CT, July 17: According to Advocate Baton Rouge photojournalist Hilary Scheinuk, a man has been taken into custody near Our Lady of the Lake Regional Medical Center. The complex as well as another hospital had been on lockdown following the Airline Highway shooting.

.@BRPD has a man in custody at #OLOL, multiple officers ran and responded down the ER ramp @theadvocatebr pic.twitter.com/7ZgW7FMTjk

Update 12:12pm CT, July 17: Law enforcement have revised the numbers shot. According to officials, six officers were shot instead of seven.

President Obama has reportedly been briefed on the shooting and Louisiana Gov. John Bel Edwards issued a statement via social media:

“This is an unspeakable and unjustified attack on all of us at a time when we need unity and healing. Rest assured, every resource available to the state of Louisiana will be used to ensure the perpetrators are brought swiftly to justice.”

The Louisiana State Police Department is calling for thoughts and prayers from citizens around the country.

Update 12:56pm CT, July 17: This piece has been updated to reflect that an additional officer has reportedly died.