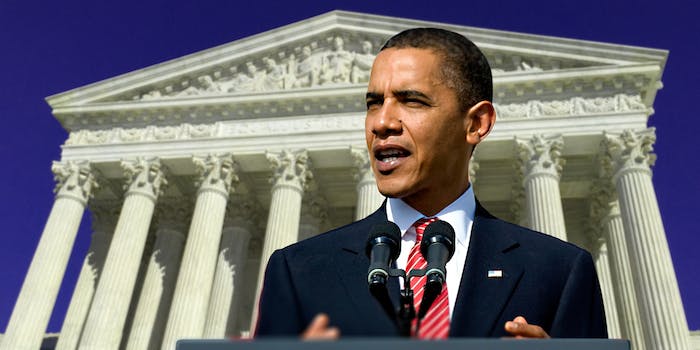 Senate Republicans have vowed not to hold hearings on any Obama nominee this year.

President Obama on Wednesday nominated Judge Merrick Garland to the Supreme Court, setting up another bitter fight with congressional Republicans in his final year in office as he seeks to fill the seat left empty by the death of Antonin Scalia.

In a statement in the Rose Garden, Obama called Garland “someone who is widely recognized not only as one of America’s sharpest legal minds, but someone who brings to his work a spirit of decency, modesty, integrity, even-handedness, and excellence.”

Garland, a 63-year-old former prosecutor, is the chief judge on the U.S. Court of Appeals for the District of Columbia, often considered the second most powerful court in the country because it hears many challenges to federal regulations.

He served in the Carter and Clinton administrations, first as special assistant to Carter’s attorney general and then as Assistant U.S. Attorney for the District of Columbia and head of the Justice Department’s Criminal Division under Clinton.

The White House launched a special Twitter account, @SCOTUSNom, to conduct outreach and messaging around the nomination. One of its first tweets was an infographic about election-year Supreme Court nominations, a pointed barb aimed at Senate Republicans who have vowed not to hold a hearing on Obama’s nominee this close to the election.

Seven current Republican senators voted to confirm Garland to the appeals court, including two who have promised to oppose his Supreme Court nomination.

Obama called on the Senate to treat Garland’s nomination “with the seriousness and care it deserves,” adding, “I simply ask Republicans in the Senate to give him a fair hearing and then an up-or-down vote.”

The president appears unlikely to get his way. Sen. Chuck Grassley (R-Iowa), the chairman of the committee that would need to hold an initial hearing on the nomination, vowed not to proceed, saying in a statement, “A majority of the Senate has decided to fulfill its constitutional role of advice and consent by withholding support for the nomination during a presidential election year, with millions of votes having been cast in highly charged contests.”

Senate Minority Leader Harry Reid (D-Nev.) nonetheless expressed confidence that the nomination would move forward. “I am optimistic that cooler heads will prevail,” he said in a statement, “and sensible Republicans will provide Judge Garland with the fair treatment that a man of his stature and qualifications deserves.”

Several major cases are pending before the Supreme Court on issues ranging from voting rights and union power to affirmative action and abortion. If the eight current justices are divided 4-4 in any of those cases, the tie vote would let the appellate court decision stand.