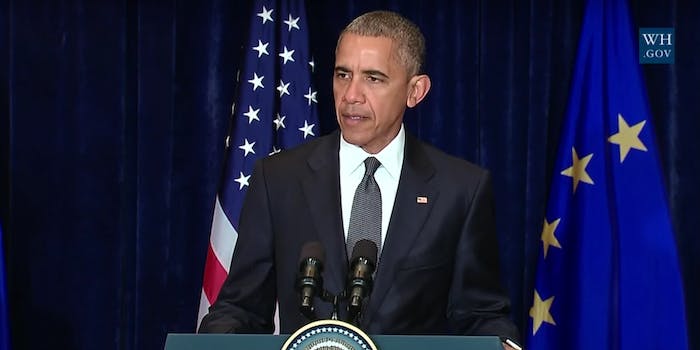 He said that there was 'no possible justification' for the shooting.

President Obama condemned the violence in Dallas after gunfire interrupted a Black Lives Matter protest and a standoff ensued Thursday night that ended in 11 officers shot and five killed, which he called a “vicious, calculated, and despicable attack on law enforcement.”

Appearing at a press briefing from Warsaw with the Presidents of the European Council and the European Commission Friday morning, Obama—who is there for a NATO summit—used the first several minutes to touch on the situation in Dallas. He said that he’s spoken to Dallas Mayor Mike Rawlings and offered his condolences and any federal assistance Dallas may need.

Obama summarized the events of Thursday night and early Friday morning, noting that law enforcement officers were targeted while they did their jobs during a “peaceful protest.”

“As I told Mayor Rawlings, I believe that I speak for every American when I say that we are horrified over these events and that we stand united with the people and the police department in Dallas,” Obama said.

While we’ll learn more about the shooting in the coming days, Obama emphasized that there was no way to justify violence against law enforcement and that “justice will be done.”

It’d only been hours since the last time Obama addressed gun violence in the U.S. He delivered a statement early Thursday evening about the fatal police shootings of Alton Sterling and Philando Castile in Louisiana and Minnesota. He called their deaths “a symptomatic of the broader challenges within our criminal justice system, the racial disparities that appear across the system year after year, and the resulting lack of trust that exists between law enforcement and too many of the communities they serve.”

Obama referenced that statement as he said that we should be aware of injustices in the system as well as the need to be supportive of police.

“Today is a wrenching reminder of the sacrifices they make for us,” he said. “We also know that when people are armed with powerful weapons, unfortunately it makes attacks like these more deadly and more tragic, and in the days ahead we’re gonna have to consider those realities as well.”