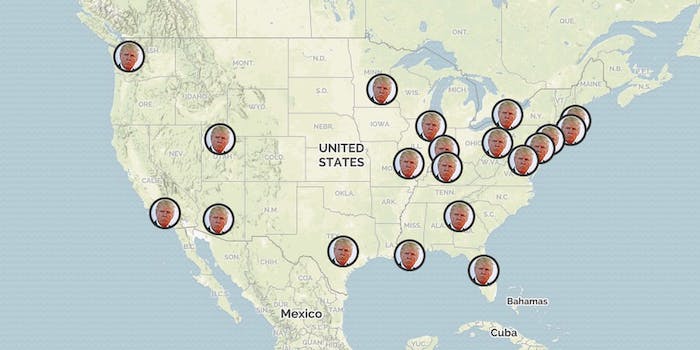 MapQuest has just unveiled the most unabashedly Trump-shaming map, and it is beautiful.

Flee him or be him?

That’s the question posed by MapQuest in an ambitious new project the company unveiled on Wednesday that not only maps where Donald Trump‘s upcoming campaign appearances are, but also viciously mocks him in excruciating detail.

Not a fan of @realDonaldTrump? Go to https://t.co/yROx4fZBMj for different ways to #AvoidTrump in your town. pic.twitter.com/0Fn2wnaMa8

“Is The Donald coming to your town? We’ve seen the parades and heard the tirades. We get it,” reads the MapQuest ‘Flee Him’ intro. “What if you get whipped by his combed-over tufts? If you hate political crowds, you’ll need a game plan to flee him. We’re here to help.”

The #AvoidTrump map appears to be a marketing gimmick for AOL-owned MapQuest’s Parachute site, a combination travel blog and booking site. Underneath the ‘Flee Him’ column is a list of places where Trump is expected to appear: from Austin to Louisville to Walt Disney World in Florida. A click on each location brings up a brief guide on avoiding Trump that also serves as a default tourist map of that town’s lefty hotspots.

In a post titled “Five ways to avoid Donald Trump in Rhode Island,” suggestions range from the local barbershop (“that perfectly coiffed mane of his, seemingly defying the laws of physics, needs no help”) to the local Muslim Society chapter (no explanation needed) to anywhere during the winter, since “The Donald already knows that global warming is bullshit. Why rub it in by showing the people that ice exists?”

Under the ‘Be Him’ column, you can learn ways to live like Trump in a few different cities: Go golfing, gamble at Trump casinos, boycott Oreos (the company moved its factory to Mexico, propelling Trump to state he’d never eat one again), and eating steaks are all part of the classy be-Trump experience.

As one witty tweeter pointed out, the #AvoidTrump map has its limits, mainly being that it’s only twenty cities long.

@MapQuest @realDonaldTrump The advantages of living in the middle of nowhere land! #DumpTrump #AvoidTrump

So if you really want to avoid Donald Trump, maybe just move to Montana.