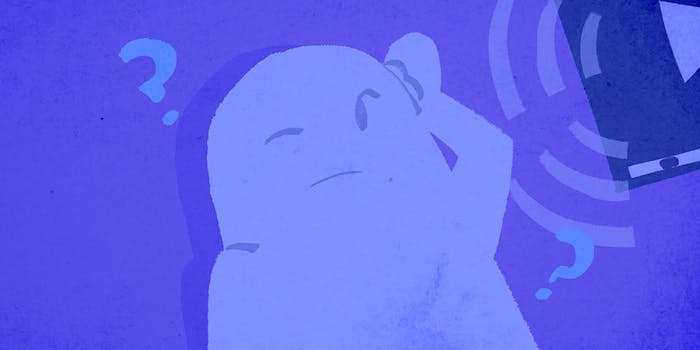 News broke on Tuesday that Facebook is beginning to test autoplaying videos that start with the audio on by default. The internet collectively cringed at the idea, knowing the annoyance such a feature could cause.

But for the visually impaired, autoplaying videos represent more than just an annoyance; it can severely disrupt their internet experience.

Many of those people will or already do use screen readers—software programs that allow people affected by blindness or visual impairments to read the text that is displayed on a screen with a computerized voice. According to one estimate, about 3 percent of online shoppers are visually impaired and use screen readers.

For those users, having a video begin playing automatically can be a burdensome experience.

“If a blind user relies on this technology and has no other alternative means of accessing the content, such as a Braille display, then the autoplaying video masks the speech of the screen reader,” Chris Danielsen, the director of public relations for the National Federation of the Blind (NFB), told the Daily Dot.

Danielson explained that when those videos play, it becomes “difficult or impossible for the blind user to hear other content, or even to access audio or video player controls.”

According to a survey conducted by WebAIM, a non-profit organization that advocates for web accessibility, more and more of the users who count on screen readers are starting to use the services on mobile devices—the platform on which Facebook is starting its tests of audio-enabled autoplaying videos.

AbilityNet, a charity based in the United Kingdom that helped people with disabilities make use of technology, suggests that it’s not just people with visual impairments who are impacted by autoplaying videos; those with photosensitive epilepsy, can be unintentionally triggered by unexpected videos or animations that contain “significant flashing or flickering.”

The organization advises sites to avoid combining audio with animations unless absolutely necessary, ensure audio is quiet and unobtrusive when it is included, and offer an easily accessible stop button, either on screen or via keyboard shortcut.

In the organization’s Web Content Accessibility Guidelines (WCAG), it notes that audio played automatically may affect a screen reader user’s ability to find and stop the media and encourages design in which sound is started by an action initiated by the user.

Facebook may argue that it meets this criteria. Video on the site is triggered by scrolling past it in the news feed, and in one of the two methods of autoplay that Facebook is currently testing, sound will be activated by tapping an icon on the video.

But another test does in fact automatically play the audio with the video as long as a device’s sound is enabled.

While users will be able to control the feature in their settings, where an option to switch sound to “always off” will be made available, users will have to be aware of this setting and where to find it. This could present a point of frustration for the over 45 percent of screen reader users who already view social media sites as somewhat inaccessible or worse, according to WebAIM.

Through a variety of initiatives, Facebook has made it a goal to bring the internet to those who currently lack access. As it brings more people online, it will encounter millions of new users with disabilities who will want to use its platform;  the World Health Organization (WHO) reports 285 million people worldwide are visually impaired.

Facebook and other sites and services will need to keep those users in mind, as accessibility online can often mean more than just having an internet connection.

When the Daily Dot reached out to Facebook regarding considerations given to users with visual impairments and disabilities in designing its autoplaying content, a spokeperson for the company said the test of the videos is very small and designed to gather “all kinds of feedback” on the feature.

The spokesperson also noted those in the test will be shown a pop-up message with information about the feature, including how to mute a video or disable audio entirely by switching sound to “always off” in Facebook settings.