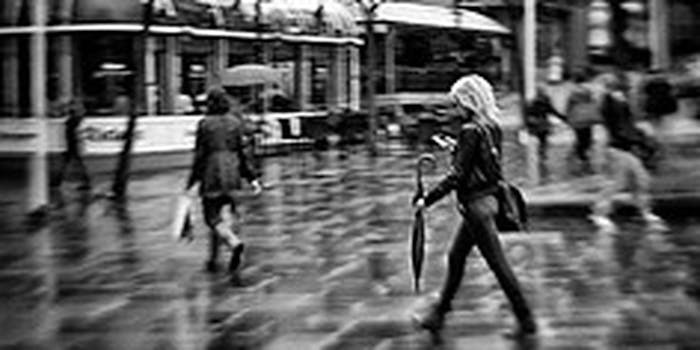 Finally! An app that will keep you from getting killed while you text and walk

Texting is great because it helps us stay in touch with people without subjecting them to the cacophonous, needling screech of our voices. But it’s also very not great because people suck at texting and walking. Our oblivious text-induced stumbles are vaguely silly in a Wile E. Coyote way until you realize that people are actually getting injured/dead because of these mistakes.

Which is why anyone with a penchant for distracted walking should take a look at Audio Aware, an upcoming app from One Llama. The app intends to use “artificial ear” technology developed by research scientists to listen for a number of pre-programmed sounds that typically signal danger: Like tires screeching, or an ambulance siren, for example.

To customize the experience, users can add their own perilous sounds, so if someone lives in an area with a specific sound played at crosswalks to denote the light is changing, people can add that in. “Other sounds will be added over time in a crowd sourcing fashion,” One Llama CEO Kurt Bauer told Daily Dot via email. “So if there’s a city warning horn or emergency vehicle that’s specific to Chicago, say, you, as an individual, can record that for your own use and then share it to the Audio Aware community so that everyone can benefit from it.”

According to MIT Technology Review, One Llama claims Audio Aware’s artificial hearing technology is quicker and more adjustable than other sound analysis methods currently in use. Bauer’s team has worked with the University of Illinois Urbana Champaign (UIUC) and the National Center for Supercomputer Applications (NCSA) for 10 years, so they have a strong background in machine learning; this might sound like a novelty app, but the technology it uses could become a valuable resource for people hard of hearing, as well as a way of checking in with surroundings for people who tend to walk around with their head in the clouds or their eyes on their screen. I know when I’m walking around, listening to Beyoncé, imagining I’ve been somebow blessed with her pipes and magnetic stage presence, I could use an alert if I’m getting close to a construction site or if I can’t hear an ambulanc.  (Unfortunately, Audio Aware doesn’t have a way to alert you when there’s a pile of puke on the ground in your dive-bar-filled neighborhood. Yet.)

Audio Aware will be available in March for Android, and it will run in the background of the app. For sounds already in the system, it won’t need an Internet connection to identify, though users will need to connect to a remote server to upload new sounds.

Bauer hopes that Audio Aware’s technology will be integrated into other devices in the future, creating a small auditory safety net to help people stay aware of their surroundings. He says One Llama is already working on getting its software licensed, so perhaps the technology will get baked into the next super-popular handheld or wearable technology device that entrances us.