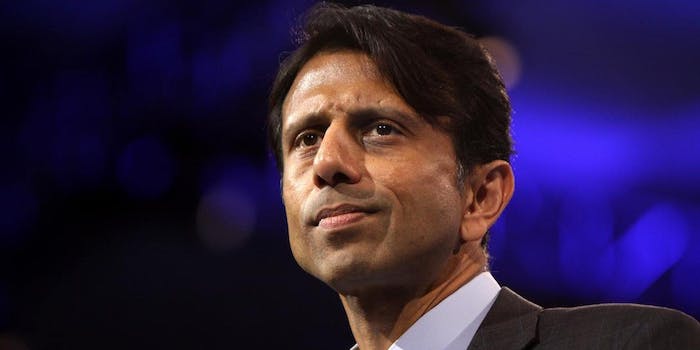 Jindal’s #AskBobby Q&A could not have gone worse

That was never going to work.

When I first spotted the #AskBobby hashtag in my Twitter stream, I thought it was an absurdist thread that led back to a Galifianakian ursprung. I maintained this fiction for well more than an hour before I finally put two and two together and came up with Bobby Jindal.

Yes, this was another ill-advised, wobbling clambering for social media relevance by a person profoundly unsuited to the exercise.

Like other politicians, public figures, and fast food restaurants of the past, clearly someone in Jindal’s communications team (who should be in line at the unemployment office by now) showed the unpopular and disconnected Republican presidential contender and governor of Louisiana a spreadsheet or a row of figures, screamed “viral!” in his face, and he cracked and signed on the dotted line.

Jindal has a presidential race popularity rating in the single digits and an approval rate in Louisiana of only 32 percent. His sometimes awkward manner, early oversell by the party, and the fact that his state warehouses its most skeptical and libertine big mouths down at the mouth of the Mississippi, meant that #AskBobby was destined to fail. Or rather, to succeed magnificently if your sense of humor tends toward the outrageous or absurd.

Seriously, who advises these guys? Did the communications goofball who sold Jindal this idea honestly not understand how energetic the demographic is who thinks of him as a square?

Jindal’s failure is another triumph for gaming the system in the name of lulz. As the kids say. Do the kids say that? Get Jindal’s communications team on the line.

While you didn't come right out and say it, you alluded to the existence of Space Court, the court in space. Can you confirm this? #AskBobby

#AskBobby When you were talking to those guys behind Republic Auto Parts in Abbeville at 3 a.m. on March 2nd, what was in that briefcase?

#AskBobby does pee come from your balls