Avid Life Media leased the escort website in 2013 through a shell company.

The first site, escorts.ca, bears a resemblance to other online directories for escort services that have triggered anti-prostitution raids by law-enforcement authorities in the United States, potentially putting the company in legal jeopardy.

After the details of roughly 33 million Ashley Madison accounts were posted online, the hackers responsible, known as Impact Team, leaked more than 197,000 private emails from the inbox of Noel Biderman, the former CEO of Avid Life Media (ALM), a Toronto, Canada–based company that operates the Ashley Madison site. Documents and emails contained in the trove and reviewed by the Daily Dot detail the company’s escort-related businesses.

“Perhaps we should start targeting cities with the largest human traffic organizations.”

Escorts.ca was leased in 2013 through a shell company called Pernimus Limited, which is listed among ALM’s “legal entities” on an internal company memo. According to a leaked contract, ALM leased the escort-service property from an Ontario-based company called Steeltown Marketing Inc., on Feb. 20, 2013.

The escorts.ca website was still active until roughly 6pm ET on Tuesday, when it was abruptly suspended. A version of the site from Aug. 1, 2015, can still be viewed, however, via the Wayback Machine. 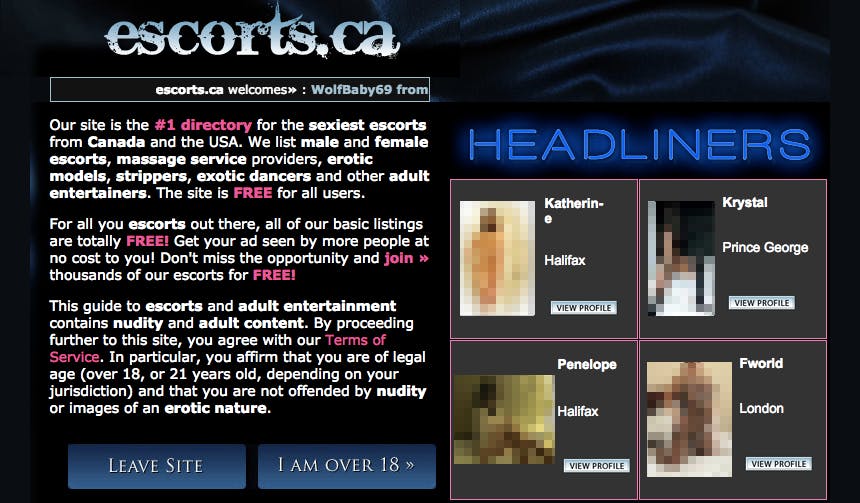 A screenshot of escorts.ca before it was suspended Tuesday.

Prior to the site’s removal, the Daily Dot spoke with five individuals listed at escorts.ca who confirmed that they were still offering services as escorts.

According to a leaked Word document dated March 14, 2013, the website was acquired under a “10-year lease for use by Ashley Madison.” ALM was to receive 65 percent of the profits and the website’s “landlord” would receive 35 percent, it says. ALM was also required to make a minimum payout of $800 per month to its partner starting two years from the contract date.

The document shows that ALM’s intention for the site, which did not charge users to browse its pages, was to funnel traffic to Ashley Madison and other ALM properties. The company intended to create landing pages for multiple sites—Ashley Madison, CougarLife, Established Men—with messages promoting “an alternative to paying an escort.”

The company noted in the document that “[u]ltimately building escorts.ca up with real content as an escort listing service would best leverage the quality of the domain.” It’s unclear, however, what steps, if any, the company took to ensure that the site remained populated with active sex workers.

ALM has not responded to repeated inquiries about the contents of its leaked emails.

In late August, the U.S. government raided the New York offices of Rentboy.com, a popular directory for male escorts and masseurs, which catered primarily to gay, bisexual, and transgender men seeking consensual sex for cash. The raid was conducted jointly by the Department of Homeland Security, the Drug Enforcement Administration, Immigration and Customs Enforcement, the U.S. Attorney’s office, and the New York City Police Department.

The U.S. government maintains that RentBoy engaged in the “facilitation and promotion of prostitution offenses across state lines and international borders,” according to a statement by DHS Special Agent Glenn Sorge. And acting U.S. Attorney Kelly Currie called RentBoy an “Internet brothel.”

“I wonder what we would have to do to satisfy the regulator that this is a dating product as opposed to escorting.”

It is unclear from the leaked ALM documents whether escorts.ca shared a similar revenue model to RentBoy or otherwise engaged in activity that would qualify as illegal facilitation or promotion of prostitution.

According to Lawrence Walters, an attorney who represents the owners of RentBoy, the ownership or operation of a website advertising escort services is legal and protected by the First Amendment as commercial speech. Further, the Communications Decency Act protects online services, he says, from facing criminal charges or liability for content posted by a third party.

“Just like Facebook isn’t responsible if somebody posts a statement saying they would engage in illegal activity, an advertising network would not be responsible for illegal activities or statements by third parties who post advertisements on the site,” Walters told the Daily Dot during a phone interview.

Walters formerly represented the website MyRedBook.com, another online escort directory. The site’s owner, Eric Omuro, was the first to be convicted by the U.S. government for operating a website facilitating prostitution. As Walters notes, however, the court never ruled on the legality of the site or the merits of the government’s prosecution.

As part of a plea agreement, Omuro forfeited $1.28 million in cash and property and was sentenced to 13 months in prison.

A year before ALM leased escorts.ca, a man named Sanjesh Singh, who claims to have once operated “Auckland’s largest private escort agency,” reached out to Biderman, explaining in a March 2012 email how to best profit off sex workers without violating the law.

“At the end of the day, I am simply an advertising platform,” wrote Singh.

“I do not solicit sexual contact (pimp) or receive any earnings from any transaction that takes place between consenting parties,” he went on, referencing his website, www.findagirl.co.nz, a New Zealand–based escort directory. “I only receive revenue from advertisers and from site paying members who wish to view additional uncensored content,” he said.

Other leaked emails show that ALM executives actively recruited escorts for another of its websites, Arrangement Finders, which operates under the ALM umbrella, and advertises under the slogan “Intimacy with a Twi$t.”

On June 18, 2012, John Santoro, an ALM employee who apparently manages the Arrangement Finders website, contacted Biderman about his escort-recruitment efforts. Santoro wrote: “Tested out sending emails to 20 escorts. Along the lines of ‘you look amazing. I’m traveling on business. Are you on AF [Arrangement Finders]? I use that service when I travel for similar encounters.’”

“I got back 5 replies,” Santoro said. “I’m getting Eros.com scraped for escorts (India),” he added, referring to another online escort directory. “Now, we have a list [of] real indy escorts that could hear about AF on a constant basis. … We might be able to do this semi-legit.”

“Escorts are def joining AF. Is there a way to let these slide through the profile approval process?”

Santoro is featured prominently in the Ashley Madison leak, exchanging over 2,250 emails with Biderman. He communicates with ALM executives from both an @arrangementfinders.com email address and a private Gmail account. A cursory Google search reveals that Santoro owns numerous escort-related domain names, including wheelingescorts.com, tacomaescorts.com, and philadelphia-escorts.com.

On its website, ALM describes Arrangement Finders as a service that connects “men and women looking for beneficial arrangements.” While the company does promote the idea that its female users can exchange sex for money (“Maybe you’re behind on your car payment”), it argues that this is vastly different than the exchange between an escort and her customer, primarily because the “sugar daddy” arrangement is intended to continue for an extended period of time, and the men are “more mature” and “wealthier.”

In its terms of service agreement, however, Arrangement Finders expressly forbids the solicitation of sex for money. With regards to “allowances”—money given to a “sugar baby” by her “sugar daddy”—the company advises taking the “negotiation” offline.

Regardless of its no-solicitation policy, the emails to Biderman, who resigned last week after his own affairs with escorts were disclosed, show that escorts were a key demographic for the Arrangement Finders site.

“2500 escort send is getting us some real escort signups,” Santoro tells Biderman in a separate June 2012 email. “Getting another list of 7k, can get it up to 45k in total. I still think these girls don’t mark us as spam, which is why this is working…”

“Escorts are def joining AF,” he continues, asking Biderman: “Is there a way to let these slide through the profile approval process?”

Biderman’s emails further show that the restriction on prostitution appears to be a semantic issue, as revealed by a January 2014 email between Santoro and a British pay-per-view service.

“As discussed we can look at running some ads for you guys across our adult TV channels here in the UK,” a Primetime TV employee told Santoro. There was one obstacle, however: Advertising prostitution on television is illegal in the United Kingdom.

“I wonder what we would have to do to satisfy the regulator that this is a dating product as opposed to escorting,” Primetime TV’s employee asked. In response, Santoro reached out to Biderman for advice. The conversation was then apparently diverted to a phone conference by ALM’s marketing manager, Binu Koshy.

The emails also show how ALM’s staff revelled in the negative attention they received for operating a so-called “sugar daddy” website.

In an August 2013 email thread between Biderman, Santoro, and four other ALM employees, Koshy notes how Arrangement Finders is prominently featured on the website NeverForSale.com; the site’s name following a dozen or so statistics about human trafficking, including some regarding the prostitution of minors.

“Who are these guys and why would they spend so much time and resources going after us…haha,” Koshy wrote, to which Santoro replied: “Perhaps we should start targeting cities with the largest human traffic organizations.”

Correction: Eric Omuro, owner of MyRedBook, was sentenced to 13 months in prison.