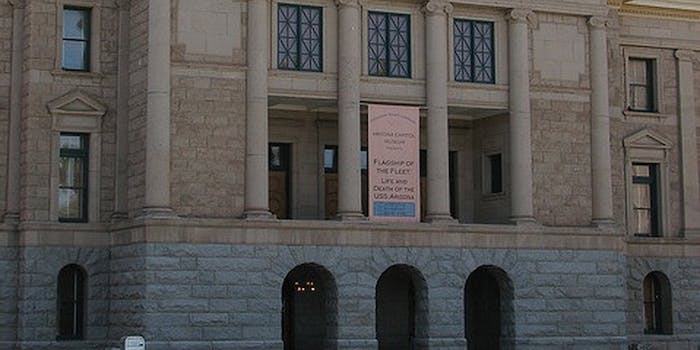 New bill could block every Twitter parody we love

House Bill 2004 would outlaw online impersonation without permission and with malicious intent. Critics say it could violate the First Amendment and bring an end to those beloved parody accounts.

Some of your favorite Twitter parodies—Sarcastic Mars Rover, @NotTildaSwinton, even @SergeantBrody—might bite the bullet under a new bill that would outlaw online impersonation.

Arizona Rep. Michelle Ugenti, a Republican, proposed House Bill 2004, which would outlaw online impersonation without permission and with malicious intent. Critics say it could violate the First Amendment and bring an end to those beloved parody accounts.

“The Internet has gone from a novelty to having a position of credibility, and it’s appropriate to have statutes that address it specifically,” Ugenti told The Arizona Republic.

She said the bill followed a plea for help from a constituent who was impersonated on Facebook and had both her personal and professional reputations damaged.

First Amendment advocates have criticized similar laws in other states (such as Texas, New York, and California), and suggest that these laws could damage people who create parody Twitter accounts, for instance.

“The problem with this, and other online impersonation bills, is the potential that they could be used to go after parody or social commentary activities,” Electronic Frontier Foundation Senior Staff Attorney Kurt Opsahl told The Arizona Republic. “While this bill is written to limit ‘intent to harm,’ if that is construed broadly, there could be First Amendment problems.”

However, Ugenti said she didn’t intend to impact parodies, and claimed the bill “has a high standard. It’s the impersonation without the individual’s consent and with the intent to harm, defraud, intimidate and threaten.”