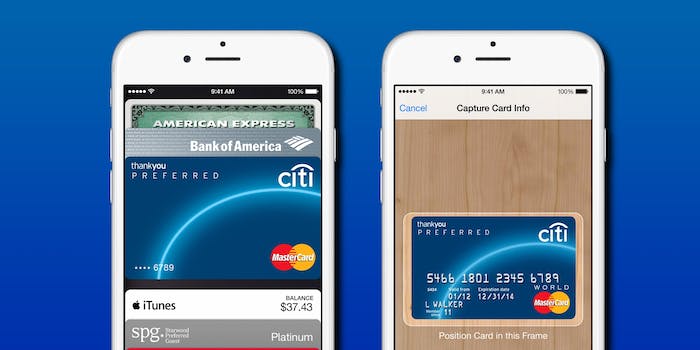 How to use Apple Pay

Want to pay for things with your iPhone? Here's everything you need to know.

Apple Pay has finally arrived. After not making it into the initial iOS 8 release, the payment service has arrived in iOS 8.1, which dropped today.

Apple is leveraging the 800 million payment cards it has on file thanks to iTunes and the App Store to create a mobile payment solution that is easy to use and more secure than your credit card, according to the banks.

Can I use Apple Pay?

The first thing you should know about Apple Pay is that it only works in the U.S. Apple will undoubtedly expand pass its home country, but for now the service is limited to America.

As of today, American Express, MasterCard, and Visa support Apple Pay. Discover tells the Daily Dot it is in talks with Apple to “add Discover cards to Apple Pay in the future.” Banks that support Apple Pay today are Bank of America, Chase, Capital One, Citi, and Wells Fargo.

We spoke with a number of banks who heaped praises on Apple Pay and its security methods. “Using the Apple Pay functionality is extremely secure and customers are still protected—zero liability for fraudulent transactions still applies,” Chase spokesman Paul Hartwick told us.

Every bank we talked to echoched Chase’s sentiments when it came to zero liability for its customers.

The banks were also vocal in their support of tokenization, the process in Apple Pay that keeps your credit card information away from Apple and merchants. Tokenization replaces your card number with an encrypted Device Account Number, which is stored in the Secure Element of the , iPhone 6 Plus, iPad mini 3, and iPad Air 2, the only devices that currently support Apple Pay.

Tokenization addresses all points of weakness across the payment system,” Randy Hopper, vice president of credit cards at Navy Federal, the largest credit union in the country, told the Daily Dot. “We hope that this is a technology that proliferates over time, and I think Apple Pay is a great kickoff to making the payments system more secure from that perspective.”

Apple notes that if your iPhone is ever lost or stolen, Find My iPhone can put your device into lost mode, which will suspend Apple Pay, or wipe the device altogether.

How exactly do I use it?

To use Apple Pay, you must have an iPhone 6, iPhone 6 Plus, iPad mini 3, or iPad Air 2 running iOS 8.1. Apple Pay resides within Passbook. You can add your card by hitting the plus sign in the top right corner and following the directions. Some banks like Chase may require an activation code, which can be texted or emailed to you.

You can use Apple Pay to pay for items in stores, thanks to NFC, or through apps like Uber and Open Table. Apple Pay in stores only works on the iPhone 6 and iPhone 6 Plus, as the iPad mini 3 and iPad Air 2 does not have an NFC chip. Apple Pay is tied to Touch ID, which authenticates the service before it can be used.

To use Apple Pay in a store, you simply hold your iPhone with your finger on Touch ID in front of the payment terminal. If done successfully, your iPhone will vibrate. Using Apple Pay within an App is as simple as selecting Apple Pay when it’s time to choose your method of payment. What stores are accepting it?

While many merchants including Best Buy, Chipotle, and Pizza Hut aren’t supporting Apple Pay right now, Apple has gathered some prominent merchants to support its service with over 220,000 locations supporting the service.

More merchants including Petsmart, Sephora, Staples, and Walt Disney World will support the service in the next few months.

Whether Apple Pay will be the first breakthrough mobile payments system in history is still up for debate. Apple has the security setup and support from banks and credit card networks, but merchants are still a work in progress.

While the lack of merchants may be an issue right now, every iPhone and iPad from here on out will undoubtedly support Apple Pay. Merchants will come around and eventually support the service, but the real question is will you use it?