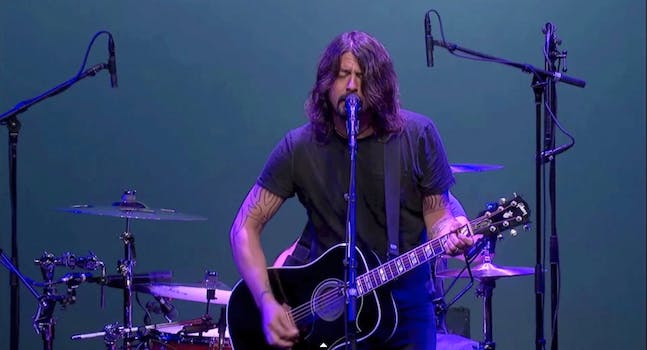 Apple loves the Foo Fighters no matter what.

Apple events are more than regular keynotes—they’re spectacles. From the presentation, to CEO Tim Cook’s quality sweaters, it’s all about pure theater. One of the key elements of an Apple press day is in the music. It’s a subtle way that Apple carries you on an emotional trip and Monday’s conference was no exception.

Like all cool old men, Tim Cook loves One Republic. And so, the musical journey started before the conference on Twitter. Minutes before going on stage to emcee Monday’s Apple Watch event, he tweeted, “Getting psyched backstage listening to “I Lived” by @OneRepublic.” That’s the same song he listened to before announcing the iPhone 6 and 6 Plus last September, as noted by this profile of Cook by Bloomberg. Last January, the band played Apple’s giant 30th birthday party for its employees.

And while Apple’s CEO got pumped to some modern dad rock, journalists and developers in the audience were being treated to much more modern sounds. The Verge’s liveblog noted that the crowd was treated to music like “Falling” by Haim, “Busy Earnin'” by Jungle, and “Latch” by Disclosure. Crowd-pumping jams that are extremely hip. After all, Apple is about to try and sell an tough audience on a product that it promises is forward thinking.

The rest of the event followed suit in a mix of brave choices to more traditional cuts (epic Jony Ive symphonies notwithstanding).

The main event opened with a song that struck the middle ground. It was a drop-heavy rock song that featured a refrain of “the sun is coming up.” Googling its lyrics turned up nothing, and Shazam didn’t recognize it either. It could’ve been an original track for the event or maybe an unreleased song. No matter, it’s a hopeful track. Bustle immediately called it “very inspiring.”

In an age where Apple is hawking a $10,000 watch, it’s noteworthy to see the company tapping a mostly unknown and untested artist to deliver one of its key products.

During a demonstration of the Apple Watch’s ability to identify songs with a single tap, Apple’s vice president of technology Kevin Lynch wanted to ID a familiar sounding rock song. It was actually “Congregation” by the Foo Fighters, which led some to freak out over the return to dad rock:

But Apple was really bringing the audience back to the familiar after a presentation full of unknown sounds. Dave Grohl and crew have been a longtime Apple favorite.

In September 2012, the band played a mini-acoustic set at the release of the iPhone 5. But Foo Fighters drummer Taylor Hawkins had some harsh words after Apple’s other favorite band U2 released their album for free on all iPhones last year. He told Australian press that the album “just kinda sounds like a fart any way you listen to it” and was wary that U2 had considered the “big brother” undertones of the album’s controversial release.

It seems The Foo Fighters are as indestructible as Apple’s new titanium watches.

If you’ve like to experience the whole thing again, here’s the playlist from Monday’s event, plus an old Apple favorite. It’s the perfect soundtrack for endlessly debating if you can drop a cool $300 o on a new watch.