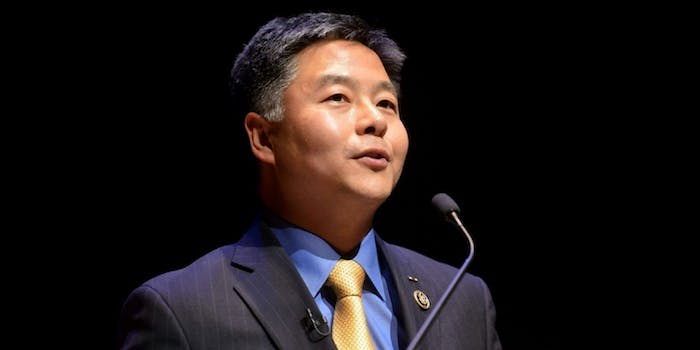 The ruling, Lieu warned, could set a dangerous precedent.

A federal judge’s order directing Apple to help the FBI break into the San Bernardino shooter’s iPhone effectively “forces private-sector companies like Apple to be used as an arm of law enforcement,” one of the most prominent pro-encryption voices in Congress said Tuesday night.

Rep. Ted Lieu (D-Calif.), a Stanford University computer-science graduate, wondered where the use of the All Writs Act—on which the magistrate judge based her ruling—might lead.

Critics of the order argue that, based on its wording, all software companies could be forced to insert potentially harmful code into their products, because, as the government argued, “writing software code is not an unreasonable burden for a company that writes software code as part of its regular business.”

“Can courts compel Facebook to provide analytics of who might be a criminal?” Lieu said in an email to the Daily Dot. “Or Google to give a list of names of people who searched for the term ISIS? At what point does this stop?”

Lieu is far from alone in his misgivings about the order, which Apple said Wednesday morning that it would fight.

The judge’s ruling on Tuesday instantly disrupted a long-running conversation about government attempts to weaken encryption to make investigators’ jobs easier. The Electronic Frontier Foundation announced hours later that it would file an amicus brief supporting Apple in the ongoing legal battle.

“We are supporting Apple here because the government is doing more than simply asking for Apple’s assistance,” Kurt Opsahl,  Deputy Executive Director and General Counsel of the EFF, wrote on Tuesday night.

Essentially, the government is asking Apple to create a master key so that it can open a single phone. And once that master key is created, we’re certain that our government will ask for it again and again, for other phones, and turn this power against any software or device that has the audacity to offer strong security.

“Surely the NSA can help the FBI do this,” Soghoian wrote. “That they’re going the legal route suggests they just want to set precedent.”

“The U.S. government wants us to trust that it won’t misuse this power,” the EFF’s Opsahl argued. “But we can all imagine the myriad ways this new authority could be abused. Even if you trust the U.S. government, once this master key is created, governments around the world will surely demand that Apple undermine the security of their citizens as well.”

Apple and the Department of Justice did not respond to requests for comment.