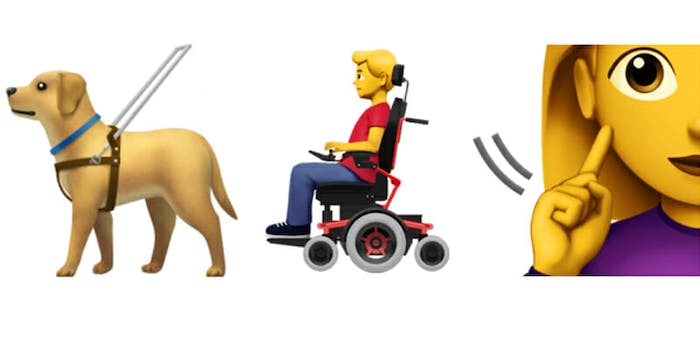 The proposed characters include guide dogs and prosthetic limbs.

Hoping to increase inclusivity, Apple has requested new emoji that will represent people with disabilities, such as members of the deaf and blind communities and people who use wheelchairs.

Apple made a proposal to the Unicode Consortium this month, charging the organization that creates emoji to design characters “to represent individuals with disabilities,” Mashable reported on Friday.

“Diversifying the options available helps fill a significant gap and provides a more inclusive experience for all,” Apple wrote.

The tech company worked with organizations including the American Council of the Blind, the Cerebral Palsy Foundation, and the National Association of the Deaf to create 13 new emoji—but Apple noted the list is not “a comprehensive list of all possible depictions of disabilities.”

The 13 suggested characters intend to represent people in both manual and electric wheelchairs, and members of the deaf and blind communities. Hearing aids, prosthetic limbs, and service animals are among other suggested emoji (you can see the full list here).

“Adding emoji emblematic to users’ life experiences helps foster a diverse culture that is inclusive of disability,” Apple said in its proposal. “Emoji are a universal language and a powerful tool for communication, as well as a form of self-expression, and can be used not only to represent one’s own personal experience, but also to show support for a loved one.”

Unicode—which has also been asked to consider emoji of interracial couples—is now reviewing Apple’s proposal. If approved next month, we could see the new characters roll out with Emoji 12.0 in 2019.