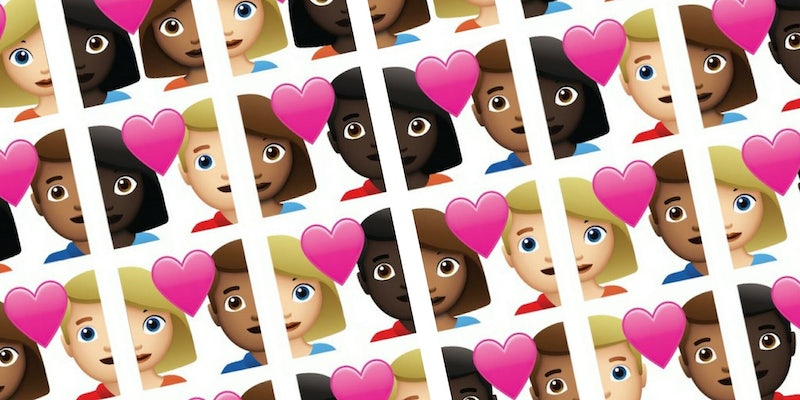 Trust me when I say Tinder is doing interracial kids everywhere a huge favor.

In a new video for Tinder, couples on separate dates are out watching movies, going to dinner, having a picnic, and even dancing half-naked in a fountain. As they go about their evening, their worlds populate with emoji—emoji movie snacks, emoji champagne, emoji stars glimmering in the sky.

There’s an emoji for nearly everything, Tinder’s video states, except for the actual couples in this minute-long clip. They’re all interracial couples—white, Black, Latinx, and Asian partners—enjoying a night on the town, but with no emoji to explicitly depict the love they share.

The video isn’t wrong: The Unicode Emoji Subcommittee, under the Unicode consortium, a nonprofit company in charge of software standards, has gone great lengths to diversify emoji across all platforms, including skin color choices, same-gender couples, and multi- or single-parent families. But we still don’t have a choice to make these couples and parents any skin tone, let alone depict interracial couples (nor gender neutral couples, for that matter).

Which is why Tinder is leading the effort to add the addition of race to emoji couples, and more specifically varying races between each partner. Why shouldn’t interracial couples be able to decorate their texts, emails, and status updates in a manner that fully reflects themselves and the person they love?

The campaign, #RepresentLove, centers around a proposal for interracial emoji developed and submitted by Tinder, along with Jennifer 8. Lee, Aphee Messer, and Reddit co-founder (and husband to Serena Williams) Alex Ohanian, who all worked on the hijab emoji in 2016. The proposal even includes photos of the submitters and contributors, many with their spouses, in interracial marriages.

The submission proposes starting with the emoji of couples with the hearts in between them (not kissing) and focusing on three skin tones—light, medium, and dark. The same-gender couples would have six different race combinations and the mix-gender emoji of a man and woman would have nine combinations for each gendered partner of each race, meaning we could potentially have 21 new interracial emoji couples should the proposal reach its end goal.

“The introduction of an inter-skintone couple emoji would, for many mixed race individuals, be a way of expressing their cultural upbringings and backgrounds, and serve as a meaningful step towards cultural inclusion and diversity,” the proposal reads. “As a number of these proposal authors are current and future parents of children with interracial parents, we want our kids to have emojis that reflect their family makeup. Emojis are the universal language of the internet and should reflect the modern world where interracial relationships are normal.”

As part of Tinder’s campaign, the company is encouraging users to sign its Interracial Couples Emoji petition. Tinder is also running a contest for one couple to win an “emojified” version of themselves—entrants must post a photo of themselves in an “iconic” emoji stance to Twitter with the hashtag #RepresentLove, and tag the company’s handle @tinder in the tweet.

It's important to #representlove. Interracial emojis would be great, and our story started because of @Tinder! What's not to love about making us a couple emoji? pic.twitter.com/uhW7Dr748X

As a white lady dating a Filipino guy for over 3 years, I know we've faced judgment not only because we're interracial, but because I am plus-size, and he is not. But love isn't what you look like, we love each other mainly for whats within. #Representlove @Tinder pic.twitter.com/yjz4T1T0FP

Rosette Pambakian, Tinder’s head of brand, told the Daily Dot that the company was inspired to make the move for interracial emoji equality after seeing research that showed the rise of online dating has led to increased interracial marriage.

“Our Global Survey on Interracial Relationships found that…52 [percent of respondents] think that interracial couples are not represented or only somewhat represented in today’s tech language culture,” Pambakian said. “Emojis have become an important way for people to express themselves so we created this campaign to ensure everyone feels represented.”

For Pambakian, the matter is personal—she said her mother and stepfather, an interracial couple, made an incredible impact on her life. While he died she was 10, his and her mother’s love taught her lessons that have transcended into her work today.

“The two of them taught me that we are empowered to love who we want—despite any prejudice or racism we may have faced. As an adult, I understand how lucky I was to grow up in a household that was so accepting and loving, and I want all interracial couples and families to be able to celebrate the diverse people that they are,” she said. “My specific experience —as well as many others’ experiences here at Tinder—have been a major driving force behind us leading the petition to fight for interracial couple emojis so that we can all be represented.”

While it’s exciting that emoji may finally represent interracial couples, the proposal does leave room for improvement; instead of proposing all five skin tones, the proposal begins with three, and is limited to the three versions of the couple emoji with the heart in the middle, which the proposal said was a “realistic” basis given the annual emoji budget. The proposal also doesn’t include expanding emoji couples to include gender-neutral couples, a feature the proposal stated didn’t yet have the capability to be translated across multiple platforms.

However, just even having this semblance of interracial representation in emoji feels like a step in the right direction. Thinking back to growing up as an interracial child of Filipino and white parents in the “colorblind” ’90s, I recall very few movies and television shows in which I could see myself—or at least, see a version of an interracial character who actually addressed their mixed identity.

I remember the cartoon Doug had Doug Funnie, the white male protagonist, who had a crush on Patty Mayonnaise, an ambiguously brown but blonde character who very well could have just been a tan white girl. Then there was the Rugrats‘ marriage of the dad of Chucky Finster, another white guy, to the mom of Kimi Watanabe, a Japanese character who then became Chucky’s step-sister. There was also Shawn, who was white, and Angela, who was Black, in a relationship on Boy Meets World—until Angela moved when her military dad got a new assignment. And uh, the white title character in Lizzie McGuire ended up with her best friend Gordo, who was Jewish, so that was something, wasn’t it?

However, I can’t recall watching anything that even vaguely resembled my parents’ marriage, and my resulting identity crises of feeling different from both ethnicities I represented. As I began dating in high school, being in an “interracial relationship” wasn’t some “progressive” choice that helped white guys “become more open-minded” as Tinder’s global study on interracial relationships purport, but my default—I’ve rarely met other people who are half white and half Filipino, let alone have had the opportunity to date someone like me.

And while talking about race and identity is an important thing to me now, it wasn’t something I was equipped to handle talking about with the white guys I dated in high school. It wasn’t that we were uncomfortable with the racial differences between us, but that we had no idea how to address it, or I couldn’t address it, having to follow the gag order of colorblindness: If you address race, you’re the one causing problems. Even being part of an interracial family, bringing up these conversations with partners was difficult.

I can’t say that having the emoji capability to address such differences more than half a decade ago would have changed things, but maybe it could have eased conversations about race with partners, or at least made me feel represented and validated among my peers.

Add the historical and political context of race in the U.S.—that interracial marriage wasn’t legal until after a 1967 Supreme Court case, and that the current “political climate” features a record-high number of Neo-Nazi organizations that may also support the creation of a white ethno-state—any effort to positively depict interracial love helps.