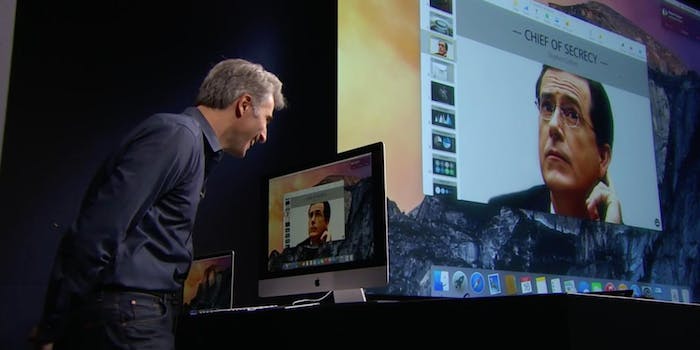 After Apple accidentally leaked images of its unreleased iPads, the company had no choice but to betray its serious sensibilities and, yes, make jokes. On stage, before re-unveiling its new iPads, Apple set aside a pretty big chunk of time to poke fun at itself, even calling up Stephen Colbert to help out.

In a fake Keynote presentation, Apple’s software chief Craig Federighi said that Apple would “triple down” on security so that its secrets couldn’t leak to sites like “Infinite Scoop,” a fake Apple blog. Colbert, Apple’s designated “Supreme Commander of Secrecy” proceeded to call Tim Cook by the codename “chairman honeycrisp” which was the highlight of the morning.

Stephen Colbert managed to make a Hitler joke at an Apple event. That’s way edgier than you would all think. Go Stephen.

An Apple exec and Stephen Colbert are doing an entire comedy routine on stage, over the phone. This is the Dad-jokiest company in tech.

Naturally, Twitter was happy to help Apple make fun of itself too.