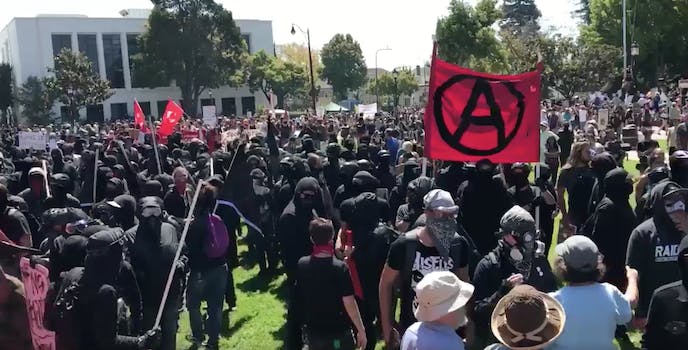 The unrest mirrors similar clashes around the U.S.

Violence erupted in Berkeley, California, on Sunday after a group of anarchists and “antifa” protesters quarreled with right-wing protesters who gathered to denounce the city’s progressive politics, according to reports.

Police set up barricades around Martin Luther King Jr. Civic Center Park on Sunday afternoon in preparation for the “No to Marxism in Berkeley” rally. Soon, according to the San Francisco Chronicle, counterprotesters—which included far-left radical antifa (“anti-fascist”) demonstrators, Black Lives Matter groups, and others—“significantly outnumbered” the people who came to attend the right-wing rally and soon clashed with them.

At least five people were attacked during the violence, according to the Associated Press. The rally resulted in at least 13 arrests—ranging from charges of assault with a deadly weapon, obstructing a police officer, and municipal code violations, the Washington Post reported.

Videos from the scene show people throwing smoke bombs, and masked counterprotesters dressed in black clothing jumping over police barricades. Several thousand people who counterprotested the rally were not connected to anarchist groups or antifa, according to the Chronicle, and the counterprotest was largely peaceful.

"Take his camera, take his phone," they are shouting at a journalist. #berkeley pic.twitter.com/hvsQ5eXalE

President Donald Trump did not make any personal statements about the clashes in Berkeley, but he did retweet Dinesh D’Souza—the controversial documentary film maker who pleaded guilty in 2014 for making illegal political contributions—who criticized the Washington Post‘s editorial decisions in the past regarding antifa.

Finally, as if by accident, the @washingtonpost breaks down & admits the truth about where the violence is coming from https://t.co/n9L1XclpDg

Trump clumped antifa in with the non-existent “alt-left” during his defense of his response to the violence that occurred in Charlottesville, Virginia, earlier this month.

Moments after retweeting D’Souza, the president also retweeted a Mother Teresa quote put out by an inspirational quote Twitter account.

The violence on Sunday echoed similar fury that sparked in Charlottesville, where a large crowd of white supremacist demonstrators were met by counterprotesters. The weekend-long rally quickly devolved into days of violence, culminating with one man suspected of having neo-Nazi ties ramming his car into a large group of peaceful counterprotesters, killing one woman and injuring 19 others.

Earlier this year, protests erupted at University of California, Berkeley after far-right provocateur Milo Yiannopoulos was scheduled to speak at the school. The university blamed “150 masked agitators” for unrest that ultimately caused $100,000 worth of damage. Trump threatened to pull Berkeley’s federal funds over the cancellation of Yiannopoulos’ speech.