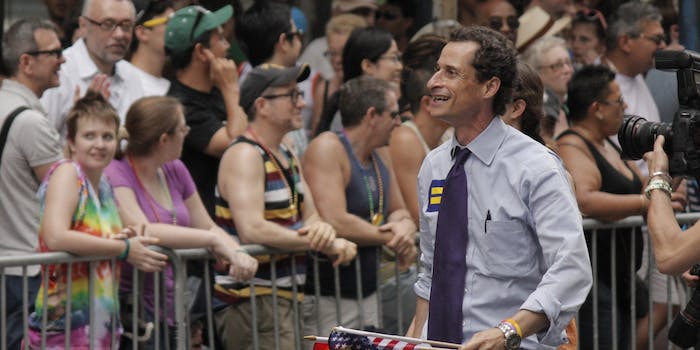 Weiner did not deny having conversations with the girl.

Federal authorities have issued a subpoena for the cellphone of tarnished former congressman Anthony Weiner, who reportedly had sexual conversations with a teenage girl.

U.S. Attorney Preet Baharara’s office has demanded Weiner turn over his phone and “other records,” CNN reports. The FBI has also reportedly launched an investigation.

Weiner could potentially face a number of local, state, or federal charges stemming from obscene or vulgar conversations with a child.

On Wednesday, the Daily Mail reported that Weiner sent a 15-year-old girl text messages over the course of months. In one message, he told the teenager that he got “hard” thinking about her, and he allegedly sent photos of himself topless and in his underwear. The girl told the Mail that he also asked her to undress on video. She also said she told him she was 15 and in high school.

Weiner did not deny having the conversations with the girl. “I have repeatedly demonstrated terrible judgment about the people I have communicated with online and the things I have sent,” he said. He added, however, that he “provided the Daily Mail with information showing that I have likely been the subject of a hoax.”

Also on Thursday, the New York Police Department confirmed that it had opened an investigation into Weiner’s messages with the girl, BuzzFeed News reports.

The girl told the Mail that she did not plan to seek charges against Weiner because the exchanges were “consensual.”

Late last month, Huma Abedin, a longtime aide of Democratic nominee Hillary Clinton, announced her separation from Weiner after reports surfaced that he had sent sexts to other women.