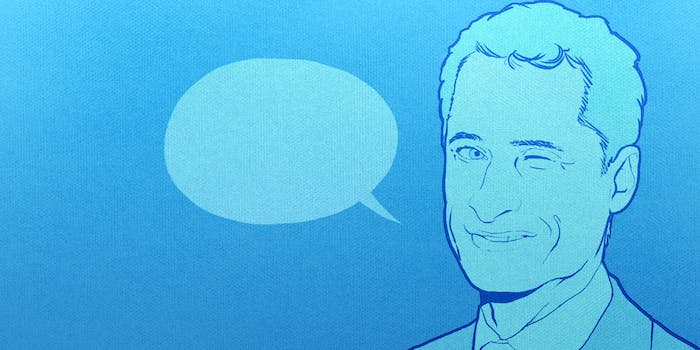 Just because he's retired from public office doesn't mean Anthony Weiner has left us with nothing to laugh about.

Shamed former New York congressman Anthony Weiner, he of the Carlos Danger sexting scandal, has once again managed to use his public Twitter account to shock the masses. Except this time he wasn’t referring to his “considerable length” (as E.L. James would call it), he was just being a hockey fan.

Watching the Monday night Western Conference Final game between the Anaheim Ducks and Chicago Blackhawks, Weiner was referring to one of many “power plays”—or “PP,” in Twitter parlance—that led the Ducks to Game 5 victory. A hockey power play, also called a “man advantage,” is when one team has more players on the ice because members of the other team are in the penalty box.

With little else to do, Weiner, the rabid Rangers fan, has even made a stab at becoming a hockey reporter since retiring from Congress, writing a 2014 column for Business Insider about his love for Rangers goalie Henrik “Hank” Lundqvist.

Weiner, who admitted to Politico in an October 2014 interview that “realistically, my political career is probably over,” has wasted no time becoming an outspoken sports superfan. Which makes sense, kind of. Where does one go from a years-long sexting scandal through which the entire world has seen your wang? You go into sports, where apparently no one cares whether you’re a nympho cheating on your gorgeous wife and newborn baby.

In the meantime, as Weiner figures out his next career move, Twitter had a good titter over the “PP” tweet.

@anthonyweiner I'm surprised this is your first time inside a Planned Parenthood.

@anthonyweiner @TooGooden16 dude everyone already knows what your "pp" looks like

Anthony Weiner. Though he may never serve again in public office, he continues to be a man of the people.