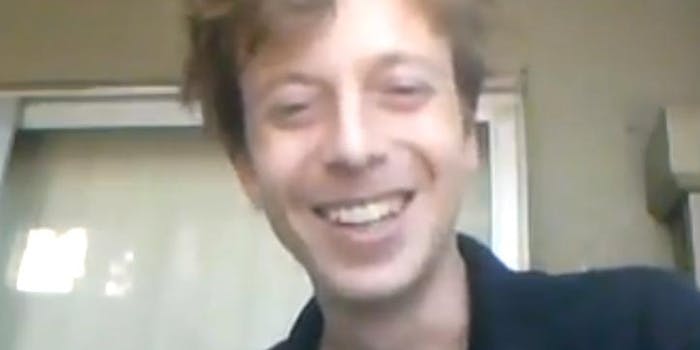 Brown, arrested Sept. 12, has been charged with conspiracy to release restricted information on a government employee.

Anonymous activist and journalist Barrett Brown has been indicted on federal charges related to videos of him insulting the FBI and threatening an agent.

Brown, 31, was charged making threats on the Internet, “conspiracy to make publically available restricted personal information of a government employee, and retaliation against a federal law enforcement officer,” the Washington Post reported.

Brown was arrested in his Dallas County home on Sept. 12, only a few hours after he posted a YouTube video threatening to knife any FBI agent who disturbed him or his mother. The incident was caught on camera thanks to a TinyChat session Brown was on during the arrest. One anonymous user recorded the arrest and shared the video with the Daily Dot.

In one of Brown’s videos, posted on Sept. 12 he threatens to ruin FBI agent Robert Smith’s life and “look up his f**king children.”

The indictment also includes transcripts of several tweets Brown posted in early September, threatening to leak personal information about the agent unless the FBI returned a laptop and other property they had apparently confiscated from Brown.

Brown is currently being held in the Mansfield Federal Detention Center in Mansfield, Texas.

Following many of Anonymous’ high-profile hacks, Brown has spoken extensively about the group, taking on a role as its unofficial spokesman.

In March, his home was allegedly raided by FBI agents following the arrest of LulzSec leader Hector Xavier Monsegur, known as “Sabu” online. Monsegur pleaded guilty to 12 counts of violating federal law after working as an FBI informant to take down LulzSec and AntiSec members.