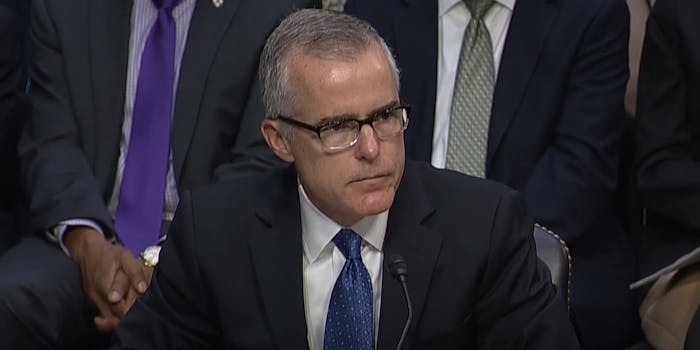 Back in September, the New York Times reported that officials in the Justice Department discussed how to remove President Donald Trump from office.

In an interview with 60 Minutes that is slated to air this weekend, former acting director of the FBI Andrew McCabe confirmed that people within the agency talked about invoking the 25th Amendment, the constitutional procedure by which a president can be removed.

Scott Pelley, who interviewed McCabe, said this morning that, in the wake of the president firing former FBI Director James Comey in April 2017, people were “counting noses” to see how many votes they could round up between the vice president and the cabinet to remove the president.

“There were meetings at the Justice Department at which it was discussed whether the vice president and a majority of the cabinet could be brought together to remove the president of the United States under the 25th Amendment,” said Pelley. “These were the eight days from Comey’s firing to the point that Robert Mueller was appointed special counsel. And the highest levels of American law enforcement were trying to figure out what do with the president.”

Now, no one would ever want their former coworker to go on national television and say you were so bad at your job, they tried to get you fired, so naturally, Trump lashed out this morning on Twitter.

Disgraced FBI Acting Director Andrew McCabe pretends to be a “poor little Angel” when in fact he was a big part of the Crooked Hillary Scandal & the Russia Hoax – a puppet for Leakin’ James Comey. I.G. report on McCabe was devastating. Part of “insurance policy” in case I won….

….Many of the top FBI brass were fired, forced to leave, or left. McCabe’s wife received BIG DOLLARS from Clinton people for her campaign – he gave Hillary a pass. McCabe is a disgrace to the FBI and a disgrace to our Country. MAKE AMERICA GREAT AGAIN!

In the interview, McCabe confirmed that he also was personally responsible for opening an obstruction of justice case against Trump for firing Comey.

McCabe was fired on the eve of his retirement by former Attorney General Jeff Sessions, keeping him from receiving his full benefits.

Update 4:05pm CT, Feb. 15: In a statement from his publicist, McCabe says that 60 Minutes mischaracterized his discussion about the 25th amendment, saying only that he was in a room where it was brought up by Deputy Attorney General Rod Rosenstein.

The anecdote, Melissa Schwartz said, is not in his book, and he was only confirming reports of the discussion.